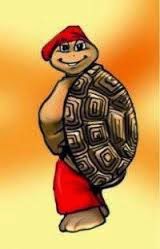 It is almost becoming history talking about folklores amongst the Yorubas, South-Western part of Nigeria. This is a core of informal education amongst African generally. The folklore is usually to teach moral lessons to children. Rejuvenating this tradition, Parable Productions organized a show in the National Theatre, Lagos, Nigeria to mark the International Children’s Day. The show was staged three times to allow people choose their preferred time of being in attendance.

Ajapa has been in the frontline of history from the days of old. Many people had learnt so much from Ajapa’s tricks and craftiness especially greediness. Ajapa has come to live amongst us in renaissance by coming on stage.

The synopsis of the play is this, Ajapa is a beloved friend to Ayekoto, a bird and he told the bird to discuss with other birds that they should embark on a trip to heaven. They agreed and donated wings for Ajapa flight and the journey was successful. He outsmarted all of the birds saying his name is “All of you” and that was the name given by the divine being to entertain all of those who embarked on the trip, thereby eating all the meal. The bird stripped him of the feather and he still begged Ayekoto to inform his wife to put all soft items in the house outside so that he could have a soft landing but Ayekoto did the opposite. He broke his shell as he dropped from heaven. The morale is, do not be greedy and forgive all those who offends you, the birds forgave Ajapa in no time.

The cast is such interesting. There is a narrator, an old sage, which gave us insight into the personality of Ajapa, he knew what Ajapa was up to per time. He informs us and we see all these things happen in no time, the clue from the old sage still gives a warning that experience and wisdom could walk hand-in-hand. Ajapa, a young man, Yarinbo, his wife, Ayekoto, Ostrich and so many other birds, the angels, the divine voice and other characters made the cast.

The exciting part this of performance is the songs that accompanied the drama, there were traditional songs and there were songs of today: the sound track of James Bond, Obimo and a gospel track to show what heaven is like. The drums and the dance steps made the guest feel the joy of stage performance.

Going further to look into the stage performance, the role of costumes and make up added aesthetics to the drama. It was almost unnoticed when the smooth shell of Ajapa transformed to the broken shell, this shows that the Make Up artiste did a very great job ensuring perfect transition from one scene to another.

Also, the technical director gave us good lightning effect as the play advanced from one stage to the other. The stage design amazed the audience; the hut of Ajapa, the cloud that made heaven so close and the tree were the birds sang. All the people behind the scene did a quality job that worth a lot of accolades.

With efforts like this, our traditional folklores will be showcased to the world. We can teach, through this medium, the moral lesson needed for this age regardless of the age of the audience. We can bring good memories to those who grew up in the days wherein praise singers used traditional drums and we can show today’s children who live in glass houses how traditional music feels, we can deviate a little from the television and the cinema and see performance on stage. We all must welcome Ajapa of this season and give it a bear hug to make a blend of modernity and tradition to make this age historic; putting the old in the new and projecting into the future.

Akin Braithwaite must be commended for taking the lead and encouraging us all to borrow a leaf from this seed of cultural and historical tilt. The management of his schedule with creativity makes it evident that we can all make the best of every minute. Ajapa: the smart and wise animal for tales.