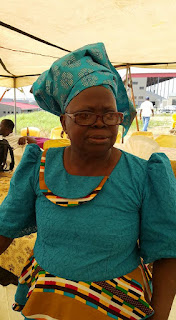 As a proud Baptist, apologies! I grew up in an era when it was not fashionable for a Pastor’s wife to also be a pastor but unknown to many people, these women are the pillars of the ministerial success of their husbands. One of such woman is Mama Rhoda Adepeju Omolola who just turned 70.
I ran into this family willingly thirteen years ago when I was in search of admission to the University of Ilorin, but the impact they have made in my life is evident. At the time of joining this family, Mama Comfort Adejoke Alao, Mama Omolola’s mum was with them. Despite her inability to read; her desire for the word of God was great as she demanded Abel Adelakun to read the Bible to her hearing twice in a day and she prayed endlessly for everyone. This attitude was inherited in double portion by her daughters; two of them are married to the ministers of the gospel; Mama RA Omolola is fervent in prayers, fasting, studying the word of God and counselling.
Mama’s silence is such a big deal! It is reprimanding without a statement; it is such loud when things are done wrongly. In my days of residing with the family, if you fail to sweep the house, Mama will gently pick up her broom to sweep. Some would consider it a form of weakness but it is a point of strength because no statement would be uttered before you get into your right senses!
The best time to call Mama is now; the reason is, she never gets offended about the last time you called. Like I said earlier, you will be the one nursing the guilt of not calling. She is so simple at heart that one would be tempted to ask, ‘Would Mama always take everything lightly?’ but a Yoruba proverb says it all, agba ti o binu lomo re n po jojo’ meaning an elderly person who does not get annoyed gains more people.
Mama is such accommodating, when I joined the family, I was one of the last generation of adopted children before Baba Omolola’s retirement. We were the cooks and the eaters of the Levites’ great meals and Saturday is always the day to return home from school! This is exclusive to children who grew up and hang around the pastorium! Also, she is not alone after Baba Omolola has gone to be with the Lord, if someone is not with her; she is with someone. This is a rare trait in our days when everyone wants to stay in different private tents.
Mama has crossed the line as the youngest of old people! She has just started a new season wherein her joy will increase daily by the grace of God and our prayer is that she would sing for joy and I pray that she would experience more glorious happenings around her for the rest of her life. Even at this auspicious moment, we celebrate with the Omolola family of Ile Falana, ita Gbeemu, Osogbo Oroki!
Olutayo IRANTIOLA