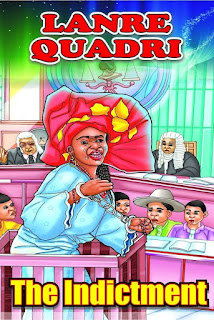 Playwright: Lanre Quadri
Published: 2013
Page: 40 pages
Title: The Indictment
Publisher: iGod Books
Reviewer: Olutayo Irantiola
The opening of this book is with a poem by the poet-playwright, Lanre Quadri, who defined stealing and governance according to the happenings within Nigeria and Africa at large. According to the playwright, stealing is a crime committed by ‘no-man’ but governance is when political officeholders take from the ‘Commonwealth’. As for me the critic, I am opening this review with a commendation that this play is written like a script ready for a screenplay. Many a times, playwright does not publish like this.
This play is a one-scene satire interspersed with drum to signify change in direction of the play. The play is modelled after the Epic Theatre proposed by Bertolt Brecht. The play opened up by the director who spoke the evident spate of corruption in the nation but seeking for volunteers who were the cast in the play. However, this play touches on all areas of governance in Nigeria and Africa.
Some of the happens in the country which was discussed in the play include the state of the judiciary and the ability of the political class to continually ‘buy’ the judiciary and subverting justice at the expense of the citizenry. The use of government agencies like the Police to quell the creativity tendencies of the citizenry akin to the maltreatment of Jelili Atiku in recent times is also demonstrated in the play.
Painfully, the citizens of the country are looking forward to the first major conviction of a prominent corrupt politician through the judiciary but as judgements keep getting delayed for ages; the people resolved to the creation of people’s court. This court is a place where verdicts are given without any legal loopholes in dispensing justice.
The main crimes among political officeholders are embezzlement, racketeering and gross misappropriation of funds. The contrast of the faith and crime of our politicians is also mentioned as every illicit acquisition is ‘God’s blessings’. The judgements passed on the President ‘Mrs Ogunbi’ by the people include decapitation, one thousand years imprisonment, thrown into the zoo to live with animals. However, the judge said it should be twenty years imprisonment with hard labour.
The director summed it up by advising the judiciary to stop the verdict of ‘’discharged and acquitted’ but the police came again with accusations that the director is guilty of treason felony. The officer requested for a bribe as a token for the director to be let loose. The mob overpowered the policeman and collected the gun from him.
Conclusively, this play is an indictment on the ruling class that are seemingly above the law and enrich themselves at the expense of the citizenry. Hopefully, one day, politicians around Africa especially will no more be ‘monarchs’ and all government agencies would work as expected. The people’s court is diverse in nature- it could be like the Arab Spring- many more. Every minute invested in reading the book is worthwhile. Ultimately, one day, the will of the people will PREVAIL &  WIN
Lanre Quadri is a young Nigerian playwright, poet, short story writer and artistic director. He has been to the following institutions- Baptist Boys’ High School, Abeokuta; Kwara State Polytechnic; University of Ilorin; University of Lagos and currently on Postgraduate studies at the University of Ibadan. His published works include TYRANTS AND ANTS; THE PSEUDO-DEMOCRAT, THE INDICTMENT, A THIEF CALLED CHIEF; TORTOISE GOES TO CHURCH. He has written over fifty screenplays for television and films in Nollywood.
(c)Olutayo IRAN-TIOLA, Lagos, Nigeria