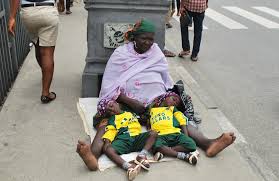 The Ministry of Women Affairs is supposed to be the advocate for all that concerns women in the society; however, it has been noted that many women, for diverse reasons, are on the street begging for alms with children most especially twins and triplets. It is a saddening situation because women at the helm of affairs have not been able to fashion out a solution to those at the lower rung of the society.
The society is such an unruly one; young men are sexually active but are not willing to take up fatherly role; women who do not want to work desire the best form of livelihood for themselves and their children. We can continue to identify the basis of these societal ills; howbeit, we need to be firm in asserting that anyone who is not ready to work should not also eat.
It is an aberration that people want to survive on alms; I cannot fathom the amount that would be made from alms neither would I agree that it is dignifying to beg for alms. There are people who earn paltry sum of money on monthly basis and they find it rewarding to be employed even as menial staff than being a burden on someone or the society.
Many times, officers of the Kick Against Indiscipline (KAI) of Lagos State, has gone to pick women and children begging for alms on the street but within a short period; they would return to the same spot where they were picked from. Do they bribe their way out? Are they released to return to their vocation of ‘begging’? These questions equally beg for answers.
This is a time for the Ministry of Women Affairs and Social Development to wake up to the task of really caring for women. It is an age-long saying that ‘whoever trains a girl child trains a nation’. There is a need to practically demonstrate this and not paying lip-service to it.
The departments under this ministry namely Child development, Women and Gender Affairs, Social Welfare, Rehabilitation, General and Economic Services should be strengthened and they should put into action all the mercenaries at their disposal if we need to get out of this mess that has become a norm in our society.
Also, there are certain decisive actions that must be taken in order to stop street begging of women. Some of these steps include, taking their children to social welfare department for adequate care and education. Any child/ren taken from a begging mother should be taken to the orphanage or other social welfare department for care. These children would also have the opportunity of going to a government school because most times they remain on the same spot with their mother using them to gain empathy from passerby. This is a way of breaking the chain of poverty and its mentality on these children. It will also break the chain of producing more street-urchins.
In furtherance of this, the begging mothers should be moved to one of the government owned skills acquisition centres. This will in turn increase the number of skilled labour, artisans and entrepreneurs that we have in the society. This is one of the simplest things that can be done by the government to change the lot of unskilled mothers.
The ministry also needs the support of the National Orientation Agency so as to educate people on the dangers of pushing out their teens who impregnate or gets pregnant. One would see that of the three major ethnic groups in Nigeria; the act of begging is more prominent among two groups asides those from neighbouring countries. One of the groups believe that it is an act of God as such, some will have to be at the mercies of others while another group assumes that it is the easiest means of surviving. If NOA addresses this problem from through the traditional rulers; there would be a reduction in begging for alms.
There is a need to entrench moral, cultural and traditional values in all children regardless of age. Any sexually active person must understand the pro and cons of the escapades. You cannot impregnate a girl/lady and think the way out is to abscond neither would you lie on your back for a young man without thinking of the outcome of such ‘enjoyment’. Everyone has a defined role and limit in the days when our cultural and traditions values held sway.
Lastly, it will be a concerted effort to overcome the issue of street begging in the society. Regardless of the attempts by successive governments to bring it to an end; some people are obstinate believing that is the gateway to their sustenance. Let us ensure that we rid our immediate environment of beggars by finding a lasting solution to their challenges. Employ them; advise them and get their children educated. The Ministry of Women Affairs should teach people how to fish and not just dole out fishes.
Olutayo IRANTIOLA
19th November 2015.
9:50am
(c)Olutayo IRAN-TIOLA, Lagos, Nigeria