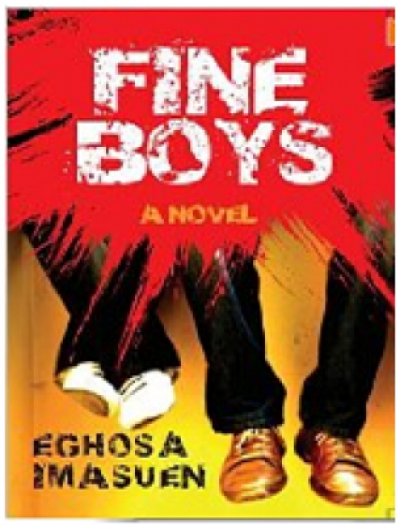 I will start off by saying Eghosa Imasuen has written a fantastic book which you must hurry to read. I am tempted to describe this book, “Fine Boys” , as a coming of age story – which indeed it is – but it is more. It is our story, the story of a period in the life of our nation. The story of the years of the melt down, when our nation finally spiraled out of control politically and economically.
At the centre of the tapestry is Ewaen, from whose voice this entrapping story is told. Ewaen can easily pass for any Nigerian who was an undergraduate in any Nigerian University in the late 80’s and early 90’s. At the very beginning of the story, we meet this smart, upper middle class adolescent who is eager to gain admission into the University to study Medicine. It’s a very familiar experience, the ‘waiting for admission’ period. Ewaen spends his time with friends, playing computer games, trying out new vices and fantasising about school.
Quite early in the book also, we meet Wilhem, Ewaen’s ‘half caste’ friend who has a penchant for over doing anything he falls in love with, as seen in his adoption of the pidgin English as his default language of communication, despite being a late comer to it. His stubborn dedication to any cause would prove to be a double-edged sword and a huge factor in moderating this story.
“Fine Boys”  leads us through the experiences of these two young men and others of their age whom they meet in school. Friendships are formed. Experiences are shared. They quarrel and make up. They fall in love. Some learn to smoke, others to drink. Something, however, is ever-present; the usual pressure to join a campus cult, ‘Confra’ as they are called in the book. Some join. But there isn’t just one cult and the field is never large enough for all, hence the conflict which plays out and threatens to consume all the friends a few years down the line.
These experiences happen against the backdrop of a country at war with itself. Eghosa brilliantly places the story, the tension soaked relationship between friends who are members of rival campus cults, side by side with the socio-political story of the country and the happenings at the time. In many ways, these sad happenings – the endless strike actions by the various University staff unions, the occupation of campuses by uniformed men, the annulment of June 12 election, the arrest of MKO and the rabid hunt for activists and pro-democracy campaigners – combined to leave a huge impact on the lives of these young adults. The vivid picture of a country which had no plans for her youth is not lost on any reader and, naturally, these young men, at that time, sought and found ways to shape their destiny. However, most of those ways were detrimental to them and society.
Eghosa’s use of language is exquisite. Simple, witty, fast paced and lighthearted. He makes the first person narrative feel so full, so complete that the perspective of none of the other characters is lost in the narration. How Eghosa manages to sustain dialogue between multiple characters in many scenes in this book and yet does justice to all, is an art I admire. His use of Pidgin English is spectacular. As expressed by Unoma Giese in a recent essay, Eghosa’s proficiency in pidgin goes beyond the flamboyant street lingo of his erstwhile home Warri; this man’s pidgin is intellectual. Nothing is lost in translation. The ease and coherence with which he communicates in pidgin, expressing himself in metaphors and onomatopoeia interlaced with delicious humour and a philosophy of resilience, is not just refreshing and sophisticated, but downright sexy.
But there is more to the language, his unapologetic use of words like ‘yansh’ and ‘craseman’ without italicising them, his use of home grown lines such as “two Nepa poles” to describe distances, his injection of just the right amount of idiosyncrasy in the speech of all his characters.
The book ends abruptly. It is akin to being taken to a height and being dropped suddenly. If you were being told the story, the natural reaction will be to ask: “So what happened next?” Such is the beauty of this book that it, in the way of thrillers, captures you and increases your heartbeat, making you yearn for more as you turn the pages. For me, the rest of the conversation, the parts left untold, is left for the discerning reader to determine for himself. It is not too far from the ongoing national conversation though, about corrupt and inept governments who have left the youths idle, uneducated, unemployed and willing weapons for extremists and trouble makers.
One issue the author is sure to contend with though, is the seeming autobiographical feel of the story. Inquisitive readers will wonder about the strong similarities between the life of the narrator and the author, and will most likely come to the conclusion that Eghosa, through this book, was telling of his experiences studying at the Medical School of the University of Benin. This question is sure to be a common feature, one that should generate exciting comments at the writer’s readings from this book.
“Fine Boys” is a well written book that will be a great addition to the shelf of any collector of good literature.