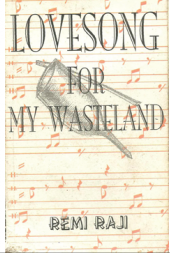 Genre: Poetry
Year of publication: 2005
Poet: Remi Raji
Reviewer: Kehinde Oladipo
Poetry is the oldest genres of composition. This offering Lovesong for my waste land is where poetry intersect drama. The Poet uses action with purgation of emotion in the prologue. The thematic preoccupation of the poet’s literary motif hinges on the concept of land and its symbolic and metaphoric importance to the people. There is a story in our history. The Poet has been to the market place of thought. It is pertinent we borrow a leaf from his poetic messages. The land is for us to Plough; not to Plunder, a poem by Niyi Osundare and This Earth My Brother, a novel by Kofi Awoonor, are in corollary with Lovesong for my Waste Land.
Raji’s poetic lines ride the wings of the clouds and beat the drum of peace. Truth will always challenge the tongue of lies. It is not normal when abnormality becomes the order of the day. Wanton waste of our natural resource is the paradox for the love song. The country consumes what it does not produce and produces what it does not consume. There is more than meets the eyes with these poetic lines. The Poet urges the people to fight for their collective request. Changes can only come when the people know that they are part of the system. We have to dialogue to put an end to the labyrinth of violence. We have to dialogue to correct some mistakes of the past.
The land has witness The Years of the Elephant- when music was made out of the skulls of men. When two elephants fight the grass suffer it. Those who say the truth become the palace soup. The Year of the Wolf-all that was saved became food for phantoms and bandits. The Year of the Dog- Everybody barked after the band and now party of bandits. The Year of the Hyena- The Hyena claimed all our limbs except for those who spoke with their legs. The way in and out of the forest is identical. The Poet writes in In The Beginning of Season: what does the farmer think / when to sleep, how to harvest or what to plant? / There is a land where thirst runs through the river/ p 15.
This river belongs to us. It is our collective inheritance. But this river of oil is our bane of disintegration. The laughter and smile that meet peoples face is fake. The land is famished. The Poet buttresses in We have Ore but invent Nothing: We have rain but hate to plant/ We have the heat and the glory of the rainbow/ But we kill our own suns with hurtful glee/ The earth swoons in the farmers hands/ But all we do is rape the land/All we know is maim the mind/All we plant are epitaphs for the dead/p19.
It is those who work that the earth support. The rain brings food to the earth. In the Year of the Elephant- People work like elephant and eat like ant. The upland sun nourishes the plants yet the farmer gaze at the sun from the window of his heart. Our can we sing the songs of victory when our voice is stolen? How can we protest when bags of rice tame our hungry mouth? What can we make out of it when we sing the national anthem in fear? The Poet put across in Why would I Think of Love in Times of War: why would I talk of tenderness when the argument in the rafters can start a fire? / Why would I peddle laughter in a paroxysm of pain? P22. We are living in a country where everybody is a talking solution.
Nobody wants to take action. Action they say speaks louder than words. Enough of false rhetoric. Let leaders lead. We have paragon of failed promises. If you were the solution would you tell us the answer without excluding the question mark? We are tired of lies. In “Ten Monarchs, Ten Seasons” the Poet writes: Believe the lies and query the truth/ or strangle the truth and embrace the lie/ Your life shall be long/ We have not reached the threshold/ But the crossroads are multiplying daily/ Ten Monarchs, Ten Seasons/ p27. Change can only come to the land when we collectively take away power from those misusing it during the election.
The state of the country is that of Victorian sensibility: a country not strong enough to divide and too weak to be united. We are not motivated to learn from the past. This is not the land our fore father’s envision.
This is not the dream of the land. Tears from the eyes of the young and old; terror terrorizing the peace and unity of the land. When will this land become a bride again? In There Can be no argument on where I Stand the Poet asks these salient thought provoking questions: “Who stole the secrets of oil from the rack of Forcados? / Who at night decimated the harvest of Kano’s pyramids/ And started the ululation and the curse in the morning? / Who burnt the trees of wealth: rubber, cocoa, kola and palm/ Which sprawled the land and crossed many rivers? / Who bled the bellies of caves and aborted earth?” (p28).
This collection of poems is an overflow of powerful recollection of the past. The land is kind enough to tell her stories of rape and wanton waste of her resources- Lovesong For My Waste Land”.
(c)Olutayo IRAN-TIOLA, Lagos, Nigeria