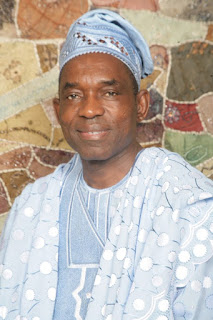 As typical of anyone in the academia, they are used to coining new words; today I celebrate Professor Segun Gbadegesin, firstly from my homeland, Okeho, a town surrounded by many hills in Oyo State.  He has proven himself as a worthy ambassador of this community and he has not dropped the ball in his belief about his country home despite being in the United States of America.
Professor Gbadegesin is one of the many ‘brothers’ to my own father. With this I mean to say, his name is always on his lips because he is an example worthy of emulation by many people who have looked up to him for ages. Gbadegesin means a lot to many generations right from his onset in the lush community of Okeho.
Some years ago, I encountered some people in their 40’s now both from Okeho and other communities who told me of the support that they got from Gbadegesin in their quest for undergraduate studies in Obafemi Awolowo University, Ile-Ife when he was still a lecturer in the school. It was said that he did not only help them to secure admission but he also helped them in other ways which had made him a part of their success stories.
As it has been said, if you want to keep a treasure from a student; keep it in a book. Professor Gbadegesin’s desire to see that children from Okeho get developed academically made him donate a library to his alma mata, Baptist Primary School, Isia, Okeho. This gesture speaks volume as children across generations will benefit from his good gesture. However, it will be a worthy project by alumni associations to embark on and the Oyo State Government should help update such projects from time-to-time.
As I grew up, I encountered him on the pages of the Nation newspaper in his weekly column where he celebrated elderly people from Okeho at their milestones and at their demise. He wrote about the historic welcome accorded to the Onjo of Okeho, Oba Mustapha Osuolale Rafiu, Adeitan II, when he visited the United States; the demise of Deacon Nathaniel Adekunle Oshin, Proprietor, Nesto College, Oyo and many other valiant men and women from Okeho. I would not say that I am treading this path about uplifting the community as little as I can in my writing and literary expedition but I may not be so far from it.
My love in being the friend of elderly people made me write him a short note in 2013. I introduced myself proudly as a young lad from Okeho and my surname is as popular as the “three-design match box- isana eleta” in Okeho. I got a very simple and encouraging response, “It’s good to hear from you and to know that you’re in to some excellent ideas. Please keep it up. Take care. Segun Gbadegesin”. As short as this note is, it has shown me that he is a source of wisdom that one must learn from at all times.
I might not be able to say something exhaustive about his political involvement in the emancipation of a new Nigeria that is still anticipated by my generation but I would say that this has emerged from his loins as seen in Dr Muyiwa Gbadegesin. . I would not want to bore you with the little I know about his struggles against the military dictatorship of Gen. Sani Abacha; the Radio Kudirat initiative; Pro-NADECO involvement etc.
I can boldly say that Professor Segun Gbadegesin is rescaping the landscape through various models right from Okeho to Ibadan, Ibadan to Ile-Ife, Ile-Ife to Maryland, USA and back to Nigeria. Our desire is that your star will shine brighter as you age gracefully. As we pray for one another in Okeho, Olofin yoo gbe o, Baba! Wa tu bo ko ere oko dele! Agba yin yoo dale o! Happy birthday, Baba Professor Segun Gbadegesin!
IRANTIOLA, Olutayo
21st December 2015
(c)Olutayo IRAN-TIOLA, Lagos, Nigeria