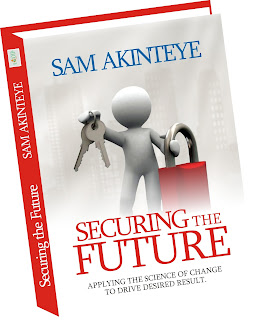 Title: Securing The Future
Author: Sam Akinteye
Year of Publication: 2015
‘The fear of an average man at whatever age is the fear of the future. The future, for many, is a monster they don’t know how to confront”.
These are the words of Sam Akinteye in his bid to dispel the fear of the future entertained by many in his new book “Securing the Future: Applying the science of change to drive desired result”
Sam, using simple, yet compelling words in this book, argued that the future of every man is not in the future but in him. “Everyone is a living magnet as well as a living transmitter. What anyone attracts and repel ultimately determines the type of future he will have”.
This three-part book contains depth of wisdom that the reader will definitely find useful for everyday living.The first part broached on the subject of foundation for a great future. In this part, the author stressed that there is a key that unlocks the creative genius in every human being and when anyone discovers this key, the lid that is placed on his ability is pushed off. He went on further to say that what stops a man from having a great future is not what he is, but what he thinks he is not. What a man thinks he is not is the thief that robs him of his potential and denies him access to a great future.
The author devoted the second part of the book to addressing the dynamics of change. He asserted that it is futile hoping for things to change. “Things don’t change because they don’t have intelligence; it is people that must change. The change you are looking for can only happen by changing on the inside. He further stressed that the weight of success does not rest on the tangible part of a man- the body, but on the intangible- the mind.
In the third part, the author discussed the subject of nation building as a critical factor in safeguarding the lives and future of the citizenry. He enunciated on certain laws that make nation great and how the application of this laws provide enabling environment for individual to thrive. Law of definition, Law of integration, Law of engagement are among some of the laws discussed.
This book surely makes an interesting read and applies to people of all ages. 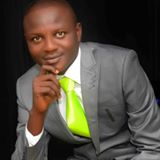 The Author
Sam Akinteye is a conference speaker, writer and insightful teacher. The main thrust of his life assignment is to equip people for a purposeful, productive and responsible living. He does this by teaching Leadership, Purpose, and Destiny.
He is the Executive Director of Logos Equip, an organization committed to Leadership Training & Development, Human Capacity Development and Publishing. He is the host of “Take the future”, a conference organized annually to teach people practical principles to create the future they desire.
He is the author of a number of other books including Wisdom for success, Take the Future, Demystifying the supernatural, and more.
(c)Olutayo IRAN-TIOLA, Lagos, Nigeria