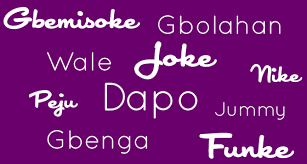 The Yoruba race has many oral account of how it can into being, some of which include the migration of Oduduwa from Mecca, the creation by Olodumare himself and many others. With all these, people were given names based on the cultural, political and religious background of the age. Names like Sangofunke (Sango gave me to care for), Oyademi (Oya held me), Osuntola (River goddess is honourable), Ogundare (the god of war has vindicated me) are examples of religious names. Ayantobo (the drummer is worthy of worshipping), Agbede (blacksmith or goldsmith) Balogun (the war lord) are examples of professional affliations and a host of others.
With time, the orientation of people changed and the way in which children are named also changed. The prefix names made a significant difference in meaning. Prefixes such as Oluwa, Ade, Ola, Oye, Temi and others came to be and as such meanings varied, for example, Ol uwadayo (the Lord turned into joy), Adedayo (the Crown turned into joy), Oladayo (Honour turned into joy), Oyedayo (Title turned into joy), Temidayo (Mine has turned into joy), Ifedayo (love turned into joy), Ibidayo (birth turned into joy). The root word of this name is DAYO with series of prefixes and as such the meaning has changed. All these names used as examples are based on the re-orientation and circumstances of birth, family background and ancestral beliefs.
While using the same Root word, DAYO,there is a contrast between the first set of names and these listed now, these are names that has bearing with the religious belief of the family still with the same root word, for example Ogundayo (God of war turned into joy), Sangodayo( the god of thunder turned into joy), Osundayo (river goddess turned into joy), Esudayo (Satan turned into joy), Egundayo (masquerade turned into joy), Ayandayo (the drummer turned into joy). These prefix has brought different meanings to these names despite having the same root word.
Another level of prefix is derived from allegiance to the dead. It could be masculine or feminine inclined. For example the prefix, Baba, until recently when it is also used to refer to God, is used to talk of bring to remember the departed father in a family examples of such names are Babatunde (father has come again), Babaseun (Thank you Father), Babalola (Father has honour) and a whole lot of others. For the females, names like Yewande (Mother has come to find me), Yetunde (Mother has come again). These prefixes have to do significantly with keeping the heroic deeds and memories of the departed entrenched in the heart.
Also, it is equally important to know that names could have suffixes too for example Bukola (added to my honour), Bukoye (added to my title). The root word used in the instance is BUKUN (added) clipped into BUK while the suffix is added, another root word is FUNMI which means give me: Funmilola (gives me honour), Funmilayo (gives me joy), Funmilade(gives me crown).
In conclusion, names have meanings dependent on either the prefix or suffix attached. Yoruba’s have very rich heritage in naming children. The etymology is improving by the day: beauty, aesthetics and meaning is being ascribed to people’s identity. The culture is different and distinct when it comes to identifying people by names. What is the meaning of your name?