August 21, 2014 by Peodavies_office
0
I have been agitated about my distance from all my old people. I am their number 1 fan as many young friends had tagged me as belonging to the older generations and not this present age. I have effectively managed the wisdom acquired from them and it is paying off even in this age that I live, I must confess.
Baba Ladele, as I have known him for some years, is my grandfather! I have accepted it and I can boldly say it. Baba took care of my maternal grandfather in the 1940s and I can say that this is the same form of adoption that I have in Professor Ademola Ladele, invariably, if Baba took care of Revd J.A Okesiji and Professor Ladele took care of me, then I am equally a grandchild.
In 2004, when I was a student of the University of Ilorin, a friend who was the President of Yoruba Students Association, implored me to join him in the mission of bringing Baba Ladele to the university so that other students can know him and hear him speak. With ecstasy, we went to Oyo and in October, 2004, Baba Ladele was showered with encomium by students and lecturers of Yoruba. It was a memorable day for Baba who got to Oyo to narrate the pleasure of the visit to Revd J.A.Okesiji.
When Dr Ladele became a Professor, I was quite to write a tribute in 2011, titled, “Like Father, Like Son:Analogy of Chief TAA Ladele and Professor AA Ladele”. It gladdens my heart that this happened while Baba was alive.
Baba encouraged my creative ability, he was one of the early contributors to the biography of Revd J.A. Okesiji. He gave me the liberty of translating his text into English language. I have not been persistent about it; I should have started or completed at least one of the texts he wrote decades ago. It would have been my greatest pride to have done this while he was alive but I missed it also.
I once asked if Baba was a poet, I called Baba and he said he was not a poet. I found out that he co-authored a book on “Ekun Iyawo”. That’s researched poetry at its peak.
In my desire to have a unified front for young people from Okeho, I co-manage a facebook page and in the month of July, 2014. I showcased many people from Okeho on the page; I must mention that at the point of Baba’s departure, 211 people had read his profile through this avenue. I celebrate him online to ensure that many generations can still find something to read about him.
I was home sick in the last two weeks and I went on an uncompleted journey like I use to do when I was younger. I have specific old people that I visit in Oyo town whenever I visited, namely; Revd J.A Okesiji, Pa Dr Moses Ogunmola, Baba TAA Ladele, Daddy Ewekeye amongst others. Unfortunately, I got to Oyo at 6pm on the 14th August, 2014, saw my immediate grandparents and left at 7:30pm for Ibadan, so as to return to work early on Friday, 15th August, 2014. One week after, Baba departed this world and I said it to myself, “I missed the last opportunity of seeing him alive and hearing his voice”.
Baba Chief TAA Ladele, you have set the ball rolling, passed it to our parents, we would keep it rolling for the coming generation to roll farther. Sleep well!
Your literary progeny,
Olutayo IRAN-TIOLA,
Ologbin Compound, Ogbinte, Okeho. 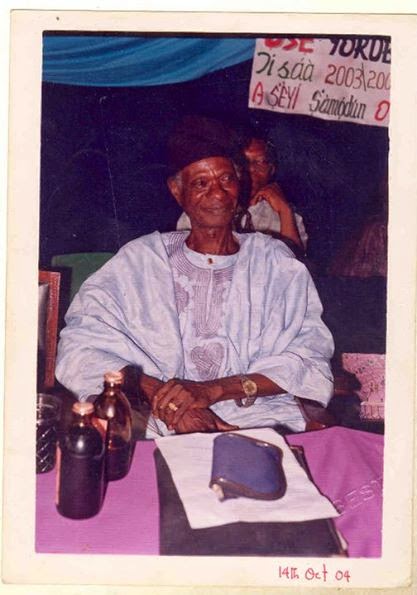