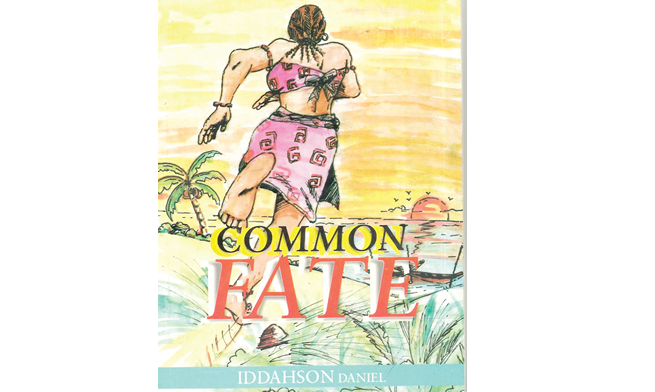 Book: Common Fate
Author: Iddahson Daniel
Publisher: Kennyson Bookville House
Year: 2011
Pages: 108
Reviewer: Oladipo Kehinde
(brighthousecreations@yahoo.com)
Truth is greater than religion. It is second to love. Common Fate is a novel that brings to the fore the mores, culture, ceremony and traditional belief system of the Owailo. The fact is that Africans cannot abandon their tradition.
There is a glimpse of light in the heart of darkness. What is the black man’s place in history? Religion is an important aspect of life; it influences many things. In the village of Owailo, the luster values of religion are heeded at high esteem. Festival, rituals and ceremony are in a circle.
The seasons and harvest mean a lot to the Owailos. They speak to the spirits of the river, mountain, forest and woods. Ojonya faces humiliation and ignominy, as it is forbidden for a lady to see Alekwu masquerade. She is a pretty lady, the dotting eyes of the young men.
She asks herself many questions but the answer is for her to run naked to the river while the young men beat drums after her. The drums speak the language of deceit and mischief.
The author writes: “When she got there she jumped into the river. When she got up she saw Aladi at the bank with a wrapper waiting for her to come out. “ p 13. The men set her up for being a devoted Christian.
There is a grouse between the Christians and the villagers. Truth is the true religion. Onyela, the mother of Onjoya is a victim of ethnic clash. A whole community is being set ablaze on the pivotal of sexual immorality committed by two adults.
Guns, machetes, spears and fire brings out the orgy of violence in humanity: “ Many were impaled alive, some were killed and mutilated, some escape naked, some old men and women were allowed to flee the land. ” p 40. The purpose of life is to be decent to one another on earth: spirit of tolerance. Igli, Igbombe and Igbotu caused terror in the village and neighbouring villages as their hands are idle. They engage in nefarious activities that bring shame to their families. To satisfy their escapade and urges, they embrace tragedy.
We are for each other as part of the creative consciousness. We have to embrace moral relativism. Ojoya and Onyela suffer collective pain. Daniel uses lucid words to propel the story .It is full of suspense and comic relief. There are many parts that lead to one source. We are interconnected.