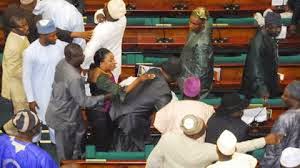 The values in the society is being eroded daily by newspaper reports, what we see happening, EFCC reports and most especially political reports. Recently, some school children went to the House of Representatives on excursion just to find the so-called Daddies fighting up to the level of injuring one another. This is not the first time it is happening in our nascent democracy but it is almost becoming of no news when such occurs.

Nigerians believe more of our politicking is more of selection and not election. Our countrymen do not have an idea of who represents their communities in these hallow chambers. The recent analysis of self-enrichment has gone beyond what we can fathom as a nation. All the elected leaders in developed economies do not earn as much as our leaders earn. That is why it is no more news that our leaders keep acquiring properties in developed nations with ease at prices natives cannot afford within their our domain.

Imagine what constituencies allowances are used to do, distribute plastics, hair drying machines, grinding machines, televisions. Gullible folks would be celebrating their heroes who are definitely tending them for impoverishment. We have seen some who gives “school buses” but these are trucks to convey students to and fro schools in their constituencies. May we even ask, how many of them have children resident in the country and if they do, what schools do they attend? The atmosphere is getting tensed daily as enlightenment comes up.

The joy of even having a political office holder in the family is short-lived, when opponents find out that the person is in the heart of his people, the next thing you hear of is assassination threats or ultimately assassination. When you know a political officer holder, you are not safe because someone is lurking somewhere waiting to kidnap you or relatives or you wait for EFCC, ICPC or any other agency to put a searchlight on such people. It is a very dicey state in life.

This Day newspapers carried out a review of the activities of members of the Senate and House of Representatives. Some of them have not made a statement since the commencement of this political term, but they clamour for funds that should cater for coming generation all because their own lineage must not suffer again. The rate at which we worship materialism has gone beyond what is necessary for living but what can even lead to an abrupt end of life.

Why do we blame the “Super Chickens”, sorry “Super Eagles”. The day they played the first match is still controversial in the history of our country, June 12. The last match was played on the day our Representatives were beating one another up. Good records are being made for generations yet unborn. It is not just the World Cup eviction but the reflection of what is happening in our country.

We are watching out nation expand in the corruption and it is being shown to children. Let no one yell when they grow up to become like fighting daddies in the House of Representatives. None of our “selected” representative dare make bills against HOOLIGANISM for they have made a public statement that they belong to this crop of the society. We hope that one day, there would be a model parliament that will render selfless service to our nation and will transmit values of worth to upcoming generations.

I commend the teachers who want to expose these children to what legislative activities looks like but I also appreciate our daddies that showed that our nation is being governed by people who will want one to do what is said and not what they do. Indirectly this value has been transmitted into children. Will these daddies rewrite this history? Will these daddies openly apologize to Children worldwide and would they learn from this episode better ways of expressing their “inherent bad nature” while minors are around. Our nation still has a long way to go if examples are not shown from the zenith of leadership to the followers.