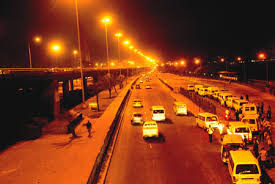 Some weeks ago when Governor Akinwunmi Ambode, took the daring step of donating equipment to the Nigerian Police Force, it was heart-warming and it brought relief to Lagosians. In his relentless effort to advance the security in the Centre of Excellence, the Governor promised to ensure that Lagos roads are glowing at night. This dream has become a reality and people are now assured that the state government is committed truly to their security.
The beautification of many cities that is seen in movies or from the aerial view is dependent on the availability of street lights; the scanty beauty of Lagos at night will be unified from both still and motion cameras and everyone can be proud to associate with Lagos. Lagos has evolved to show her actual beauty in form of landscape during the day and street light at night.
At some point, Lagos look fragmented in the provision of street light; you would find out the highbrow areas of Ikoyi, Victoria Island and the Third Mainland Bridge are well lit at night but from the Oworonsoki end of the road towards Berger, it is always in darkness and this is why crime thrives around these areas where hoodlums operate with impunity on commuters. As the roads are now lit appropriately, the efforts of the Rapid Response Squad (RRS) can be felt by the populace.
This street light has been of immense help to drive during harmattan haze when visibility is greatly reduced. It is a known fact that many ‘tokunbo’ vehicles imported into this country have poor headlamps because there is no need for halogen lamps on vehicles when the street lights are working. With the street lights, drivers now have a respite.
In the same vein, road carnage which occur regularly on Nigerian roads would be reduced significantly in Lagos with the revival of street lights. Many vehicles have ran into stationary vehicles because there is no sign to indicate that the vehicle is grounded but these street lights would help reduce such fatalities and also help drivers to see metres ahead and make decisions that would not negatively impact on others.
Mechanical devices do not usually notify the owners or drivers of when it would develop fault. It is agreed that technology has advanced to a large extent when vehicles give signals on their dashboards but nonetheless, some would still be damaged on the road. There have been instances when such vehicles are vandalized over the night or the driver attacked while trying to get solution to moving the vehicle out of the road. The street light would help stranded commuters a great deal.
Complaints about vandalized social amenities will reduce largely when the facilities installed by previous administration are put into use. Many of the cables used in powering these street lights have been stolen and some of it damaged beyond repair because it has been abandoned for years. This implies that it is cheaper to maintain these social amenities than to always reconstruct them. 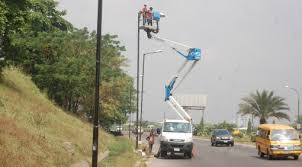 The revamp of street lights is also a way of getting the government agency in charge of it to be meaningfully engaged; there are many agencies that have gone dormant because they are not rendering their services to the government and the citizenry. They already have the preconceived mindset of ‘the wages of the labourer would be complete at the end of the month’. This is to challenge all the Directors and Permanent Secretaries to bring to the notice of his Excellency activities that can improve the state to the benefit of the populace and provide employment for skilled people.
The State Government is implored to ensure that the light for the pedestrian bridges is also used because hoodlums make use of these bridges to perpetrate their evil enterprise both at dawn and at dusk. Old bridges without this facility should be reconstructed partly or completely to make people avoid crossing the road at places where the pedestrian bridges are sited.
Lastly, newly improved technology which consumes less electrical power and solar-powered street lights can be used to reduce the cost of procuring and maintaining these social amenities. Recent developments have shown that there are cost-effective ways for social amenities.
Lagos is truly progressing in the days of Akinwumi Ambode and nobody should be a clog in the wheel of the progress of the state. Lagos is sprouting everyday to be not only the chose destination in Nigeria but also in Africa. More strategic work needs to be done to completely transform the state to the status of a mega-city which is the dream of her founding fathers.
Olutayo IRANTIOLA
@peodavies
(c)Olutayo IRAN-TIOLA, Lagos, Nigeria