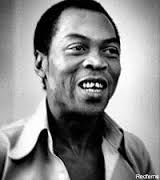 Fela Anikulapo-Kuti passed on August 2, 1997 but his son, Femi and Seun have decided to toll the line of their father, who was a Nigerian multi-instrumentalist, musician, composer, pioneer of the Afrobeat music genre, human rights activist, and political maverick.
Femi’s musical career started when he began playing in his father’s band, Egypt 80. In 1986, Femi started his own band, Positive Force, and began establishing himself as an artist independent of his father’s massive legacy.
His first record was released in 1995 by Tabu/Motown, followed four years later by Shoki Shoki (MCA), which garnered widespread critical acclaim.  In similar fashion as his father, there have been complaints of Kuti’s criticism of his homeland Nigeria, specifically in the song “Sorry Sorry”, “What Will Tomorrow Bring” and “97”.In 2004, he re-opened The Shrine, his club, where he recorded the live album Africa Shrine.
The New Afrika Shrine was first started in the early 1970s by Fela Anikulapo-Kuti but was burnt down by the military dictators. The new replacement is now run by his son Femi and daughter Yeni Anikulapo-Kuti. The New African Shrine is currently a beehive of activities such as live music, food court. Every first Saturday at the shrine is the  fuji show. Femi Anikulapo-Kuti usually perform at the shrine whenever they are in town. The Shrine has different quotes of Late Fela Anikulapo-Kuti on its walls. It gives an insight of the thoughts of the late afrobeat legend.  Yearly, the shrine host the felaberation festival. Felabration is always held in the week of October 15 to coincide with his birthday. 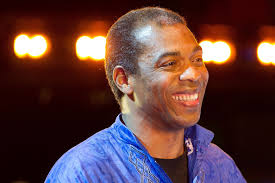 In 2010, Femi received two Grammy nominations. In 2012 he was both inducted into the Headies Hall of Fame (the most prestigious music awards in Nigeria). In 2014 a management deal between Chocolate City Music Group and Femi Kuti was reached. Femi Kuti was a judge on Nigeria’s huge TV show Nigerian Idol Season 3. In October, last year, Femi was in for a hernia surgery and he has fully recovered. He was in a rehearsal session with his Positive Force on Thursday, March 31st at the African Shrine. The world looks forward to the next ‘Bam-Bam-Bam’ from the stable of Femi Kuti!
REFERENCES:
The facebook wall of Afrika Shrine
The Wilikipedia Page of Femi Kuti
The Wilikipedia page of Fela Kuti.
My Destination
(c)Olutayo IRAN-TIOLA, Lagos, Nigeria