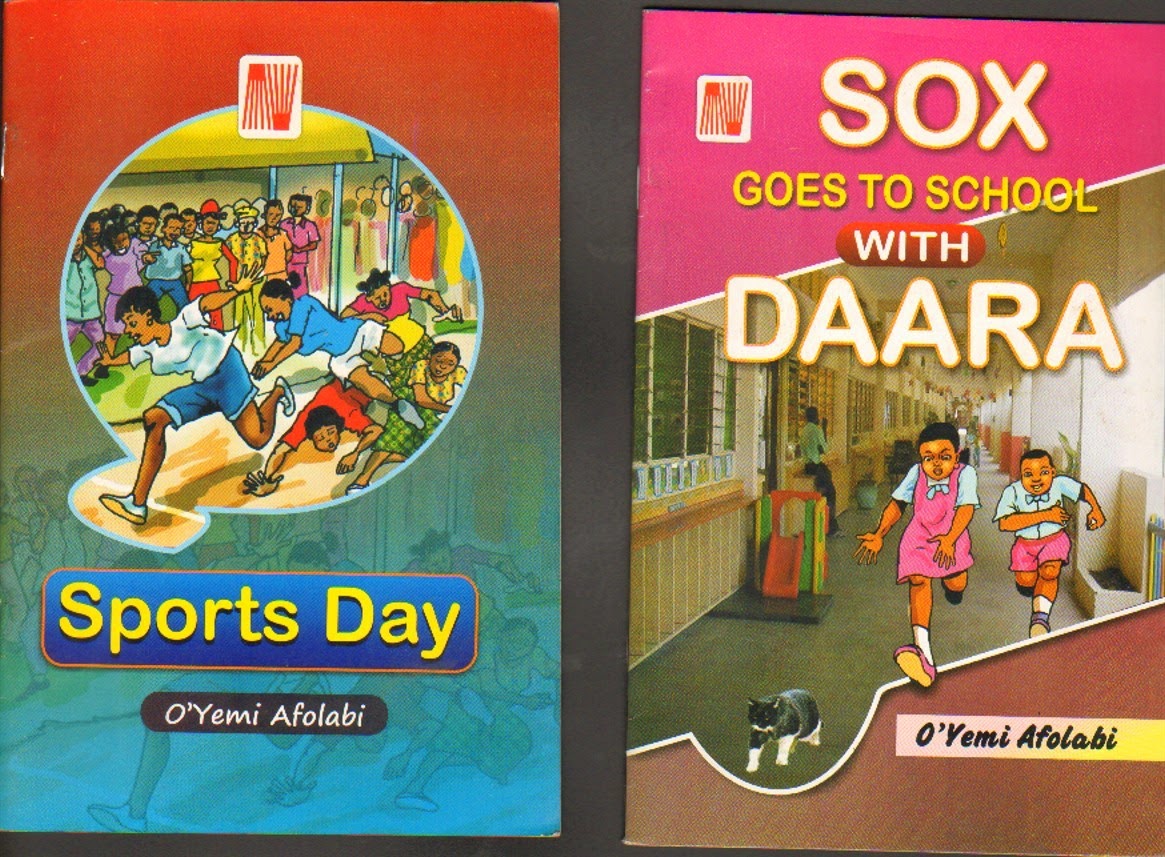 Genre: Children literature
Titles: Sox Goes To School with Daara; Sports Day; Daara’s New School; Sox Goes Away & Only Yesterday
Publisher: Nelson Publishers
Reviewer: Olutayo Irantiola
Children literature is one of the literary pieces that take one aback. It can be a skillful dramatic return to one’s growing with details of how life was at that time. In the same manner, writers of children literature patiently reflect on the thing that distinguishes their age from the current age. O’Yemi Afolabi has painstakingly documented a lovely children story in short stories of different titles that made up a series.
One of the stories titled “Sox Goes to School with Daara” is a narration of the Daara Ariyibi’s taking a cat to the school. On this fateful day, she woke up crossed with everyone for not coming to wake her up early. Daara loved Sox, one of the kittens she named after Fifi, the mother cat, gave birth to four kittens. Daara hurriedly picked her bag from the study and left for school. When she got to school, she unzipped her bag and Sox pops out. This created a scene in the school. Daara’s friend, Naia, was implored not to mention it to her mum. It was a playful ride for the children back to their various homes as they played with the cat. Daara got home and implored her nanny, Aunty Sabrina, not to mention it to her Mum.
Every parent would appreciate this story because it is a reflection of the playfulness of children that can be expensive afterwards. Parents need not leave children to themselves most especially when they are still in the primary school.
In the story tilted “Sports Day” this is an online of one of the days that children look forward to in an academic year. It is a season when children are engaged out of the classroom. This is one of the ways of building their confidence, developing their competitive spirit of children and bragging about their parent’s ability. It was a gratifying moment for Daara and her mum as they both won medals. Daara won medals in the 100 meters race and the long jump while her Mum won the Parent’s race respectively. It was at this stage that the headmistress taunts the family about how fast they run and so their pets.
This story ran into another title, “Sox Goes Away” that is the point in which a parent told Daara’s mother about the day in which Sox Goes to School with Daara. On Saturday, Daara’s mum sends Daara to her cousins. Thereafter, she informed Aunty Sabrina of different people would come pick all the cats. When Daara returned at 4pm, the house was too silent for her and she discovered that the cats are no more in the house. This implies that she is very observant.
Daara was scolded for not greeting her mother first when she returned. I must say that this is gradually disappearing in this present time and it is a culture that must be revived. The doling out of the cats was to serve as a punishment to Daara for keeping a secret from her mum.
Another story titled “Daara’s New School” is a narration of the new school of Daara. As for me, I call it the Lagos story. Prominent streets on the Island were mentioned. It would be easy to visualize the environment for anyone who is used to Lagos Island. The named streets were Raymond Njoku Street where Daara’s house reside; Maitama Street where her school is located; Cowrie Creeks, which separates Ikoyi and Victoria Island, Ikoyi has three zones; Obalende, Old Ikoyi and South West Ikoyi. Other places are Falomo Shopping Complex; ShopRite in Lekki; Banana Island and Bourdillion road.
The introduction of the new school to Daara was systematic after dinner by offering her the new school uniform. Daara objected resuming in the new school but when she resumed at the new school; she met children of her mum’s friend, this was a big consolation for her and she found the school as a place of comfort.
The gradually disappearance of Yoruba language is seen in this text, on page 4, Daara greets her mother in Yoruba language while the mother responded in English language. This depicts the failure of the elite in giving cultural education to their children. There should be a change of attitude to this trend if we want Yoruba language to survive.
Pidgin was also used in the book as the English of the semi-educated domestic staffs.
On page 5, “E taste well, well o. Daara self like am.” Also on page 28, “Daara na fine, fine baby”

The growth of Daara into adolescence is mentioned in “Only Yesterday”. The story is about the vacation of Daara to England and France. A caring mother who wants an all-round development for her daughter wants her to start learning how to cook by being with Aunty Sabrina in the kitchen; she wants her to start washing her wears. A listening Mum has the opportunity of knowing all that is happening to her daughter, as such; Daara told her “mosquitoes had bitten her down here. I don’t know how they got into my panties,” page 30. That was the breakout of menstruation and also the protrusion of her breast.
At this point in the writing, we had a translation of a Yoruba proverb into English, “the pot that wants to consume chillies should be prepared to have its bottom fired” which is “Ikoko ti yoo jata, idi re a gbona”. However, I am not comfortable with the absence of a father in the Daara series. A properly raised child needs the presence of a father.
This series is well woven and structured. Although, there is no place in which the novellas were labelled but they follow in a sequence. Also, these novellas have independent themes that speak to the heart of a child. Aunty O’Yemi Afolabi has crafted an incisive series which can be used for pedagogy in the primary school.
(c)Olutayo IRAN-TIOLA, Lagos, Nigeria