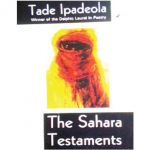 Tade Ipadeola’s third collection of poetry is philosophically and elegantly crafted to depict the joys, the pains and the harrowing challenges, not only of Sub-Saharan Africa, but by extension, that of the continent. With the Sahara as a metonym, he portrays the vicissitudes of experiences of the people, capturing all in a sequence of 1000 quatrains he has called The Sahara Testaments. The mention of sahara always bring the image of the Sahara Desert to mind.
In an interview on the book, Ipadeola disclosed that among other triggers, he was inspired to write about the geography and prehistory of the Sahara after he crossed the desert at noon en route a reading in Dehli. “Even from 36,000 feet in the air you can see the features of the Sahara because it is so hot that the clouds generally are thinner.”
A desert as it were, sahara signifies deprivation and lifelessness. The poet used the Sahara allegorically to highlight the challenges, the geography, history and future of Africa. Starting every chapter with a quote, the poet opens and enriches the mind of his readers challenging them, with his remarkable narrative and lyrical presentation, to decipher the wisdom inherent in the lines.
From the rich and diverse languages in the region, the beauty of the African continent, to environmental pollution due to oil exploration and production activities, inflation in Nigeria, the wars, the terrorism, to religious hypocrisy and intolerance, common folks and personalities, among other topical issues, Ipadeola wrote, transcending the past and the present to prophetically delve into the future.
On the degradation of the continent due to oil exploration and production activities, the poet notes its effect on nature in one of the poems.
He ended it by remarking that it is only by going green that the land will be restored: “The decorous chameleon of my continent / Rouses to incantations from gas flares / And a millennium of sand turns pertinent / In as sea-bound spill of harried hectares.” As if in prophesy of the current situation in the country, one of Ipade-ola’s poems, though written two years earlier, discusses the horror, the agony and pain of mothers who lose their children and loved ones to violence and terror. “It took a desert’s heat to revisit the sorrow / Of mothers.
Those for whom the world entire / Was Ramah. Women for whom no tomorrow / Offered lasting solace. Whose tears tire; Not. It did not matter, saint or courtesan / If son or daughter could not be found / In the wake of a slaving raid, as one woman / They mourned freeborn children now bound.”
No wonder James Russell Lowell, an American Romantic poet, critic, editor, and diplomat wrote that “Poets are the forerunners and prophets of changes in the moral world. …we love to go back to the writings of our old poets, for we find in them the tender germs of many a thought which now stands like a huge oak in the inward world, an ornament and a shelter.”
With his firm control of poetic language, he artistically portrayed his thoughts, blending both sound and sense. Though he has the elite in mind due to his philosophical nuances, he still remembers the not very lettered, writing a couple out of the over 200 poems in pidgin English.
With some as short as just a quatrain, and others have more, spanning two pages, the poet allowed his imagination to roam flawlessly.
His flow of thought is marvellous, starting with the First Breath, made up of three quotes, he followed it with 106 poems contained in five chapters before the Atlantic Interval, which has only four poems. Infinite Longings follows with 38 poems before the Mediterranean Interlude, a philosophical and poetic write up spanning a whole page, without any form of break or period.
He ended the collection with Remnant Music, a compendium of poems, numbering 69, with only asterisks used to separate one from the other.
Because of the poet’s penchant for detail, he tenaciously maintained an abab rhyming scheme for the quatrains, relaxing only in the Remnant of Music, where he cared little about rhyme. Though a lawyer, Ipadeola is not new to Literature. He has published three volumes of poetry.
A Time of Signs, which was published in 2000 and The Rain Fardel , which came out in 2005. His short stories and essays have also been published in diverse media.
Winning the Delphic Laurel in Poetry in 2009 with his poem Songbird in Jeju, South Korea, he also won the NLNG Nigeria Price for Literature with his third volume, The Sahara Testaments. Having patiently studied the beauty of this great work, we observed that assigning a title to each chapter and each poem would have made the work more reader friendly – helping in ease of identification, study and referencing.
Though deliberately planned and presented that way, the poet did not consider the youths, the leaders of tomorrow, who would have reveled in the rich wisdom that fills the book. Because of its richness in discussing both serious and contemporary issues, a couple of the poems could be chosen by the West African Examination Council or any other body for study by the students but with numbers and asterisks and no titles, it would be difficult. Outside the lack of title, the book is a brilliant work.
It is therefore not surprising that Rotimi Babatunde, Caine Prize Winner and Jumoke Verissimo, author of I am Memory described it as “remarkable in its blending of elements from two traditions of the epic – the broad sweep of the narrative and the intellectual rigour of the philosophical with the haunting immediacy of the personal lyric.” and a “…literary accomplishment that posterity may use as a reference point…” respectively.