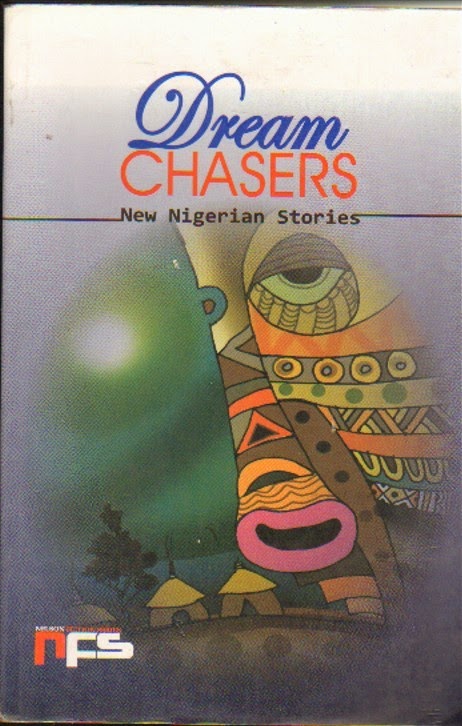 Title: Dream Chasers (New Nigerian Stories)
Publisher: Nelson Publishers
Year of publication: 2013
Genre: Short Stories
Pages: 286
Reviewer: Olutayo IRANTIOLA
Dream Chasers is an anthology of short stories by different writers, however, in its diversity; the stories are relatively close to the Nigerian experience through the names, locale and themes. The seasoned writers wrote wonderful pieces in few words and each storyline cannot be easily determined by the reader because of the heavy use of suspense.
Major Nigerian cities mentioned in the anthology include Ibadan and Port-Harcourt in Camouflage; Nsukka, Orba, Onitsha in the Magic Ring; Iseyin, Okeho and Oyo in the Great Discovery (this story appeals so much to me because these towns are all connected to my ancestry); Marina, Lagos in Love on the Marina; Ile-Ife, Onitsha, Surulere, Lagos in Tough Guys write poetry; Bere, Ibadan in the House that Hunger Built. Other locations mentioned in the book include USA, South Africa, Paris and Zimbabwe.
The Nigerian content of the book is found in the themes of each story except in How I met Steve Biko and What Would Saffron Do? The themes include: deception, intricacies of intercultural marriage, armed robbery, single parenthood and depression in Camouflage; Incest, Western influences are the evident in The Little Girl with Bussing Breasts and a Bubble Gum Laugh; Insecurity, Insurgence, HIV/AIDS, Death of Neighbour, Information shared via Social Media were mentioned in The Curtain.
Others are   Voodooism, Gambling, Apprenticeship, Western education, Assumption, Religiosity explored in The Magic Ring; Traditions in The Great Discovery, Depression, Loss of a grown-child, Foreign education, dashed hope in Love on The Marina, Intertribal marriage, Affection in Too Much Pepper; Extra-marital affairs, Reminiscence in “Fur Elsie”.
Additional themes in the book include Fraud, Impersonation, Disgrace, Financial challenge as reflected in Double Wahala; Joy of reunion, joblessnesness, desire to travel abroad, daring nature, love in Tough Guys Write Poetry. The House that Hunger Built is related to the tall Yoruba narrative similar to the Amos Tutuola’s style of Africanism.
The other two stories have African themes such as Xenophobia (which has just reared its ugly head again in the last few weeks), Supporting acquaintance, bribery, doggedness, professional knowledge and assault in How I met Steve Biko while suspicion, unaccomplished mission, despotic leadership in What Would Saffron Do?
The language of the text is lucid and concise. Interestingly, the text is domesticated because Pidgin is infused into the book. There is hardly a Nigerian who does not understand Pidgin. It is the rustic language spoken by the uneducated or the relaxed version of English. Various dialects of Nigerian languages, proverbs, abuses and slangs also intersperse the book-in Camouflage the word, Sojaappear on pg. 3; In Stain, words like aruon pg. 137, ala bekee on pg. 145, Cheneke, Mba on pg. 141, osu and diala on pg. 149; In The Great Discovery agbalumo (African star apple) tree on pg. 152 fatalisa (bastardized pronounciation of fertilizer) on pg. 155 amala and ewedu (a local delicacy) were mentioned on pg. 157.
Others are in Too Much Pepper these words appeared: Oyinbos  (whitemen) on pg. 172, Onyara, were, were iranu, olosi to ri re ti daru patapata, won ri goloto goloto bi adiye Agric, olodo rabata on pg. 175, Dansiki and Bata on pg. 177; “Fur Elise” has the word yansh, kukuma on pg. 184, toto on pg. 185; Double Wahala has words like Okuko na-aboputa mma na-egbu ya (an Igbo proverb), Ebube Chineke on pg. 195;  In the House That Hunger Built; Yoruba words like ayo on pg. 237, iwin on pg. 238, Esu on pg. 240.
What use to occur amongst musicians in the past where they sing from other languages in other to gain an audience (fans) among the other tribes was also done in this book as well. The author of Camouflage, Lola Akande used Igbo characters while the author of Great Discovery is Kenechukwu Obi who wrote about Oyo, Iseyin and Okeho.  There are few errors in the book, however, it might be limited to the particular copy used, which are negligible.
The book is largely and proudly Nigerian. It is a way of exporting our literary culture and nuances to other cultures and countries. The book is another distinct piece from Nigerian writers.
(c)Olutayo IRAN-TIOLA, Lagos, Nigeria