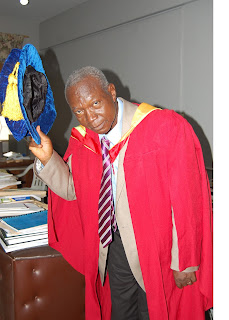 Revd Professor A.C. Odebode of the department of Botany, University of Ibadan belongs to the old stock of the academia with the intention of living an impactful life. He hails from the agrarian community, Awe via Oyo town in Oyo State and either by twist of fate or fortune; he has lived his live around plants and crops. He is on the global map of impactful people as a clergy, a University lecturer and within his sphere of influence.
I have no authoritative fact but I have the moral right to judge from my relationship with him spanning twenty years that Odebode’s influence would have started through his academic sojourn at different schools from 1963 till 1990. Some of the schools he attended are Awe High School; Baptist Academy, Lagos; Catholic University of America; Howard University and the University of Ibadan where he was awarded his Ph.d in Botany.
The maxim of Professor A.C Odebode for children is akin to the title of the book by S. Truett Cathy, It is better to Build Boys Than to Mend Men. He hunted for boys and drew them closer not with money but by advising them towards their academic from their secondary school till they graduate which is the minimum; he then drives one towards postgraduate studies. I am proud to say that I am one of the beneficiaries of this gesture.
In the same vein, I will want to add that Professor Odebode by all standards is a lecturer who wants his students to excel. I have been following the progress of one of his postgraduate students who would be completing his Ph.D soon. He has a large heart for anyone who is willing open his hands and he would assist the person to soar within and above his confines. This shows that his only joy is to see people succeed.
As a clergy, I knew of his exploits when he went to the University of Dar es Salaam, Tanzania on Sabbatical. He found out that the Baptist denomination is not visible in the country. He volunteered to be a missionary and he returned to Nigeria with a student for the Nigerian Baptist Theological Seminary to get trained and continue to water the seed he planted. Asides other role in his local assembly church, he was once the chaplain of the Airforce Comprehensive School, Iyana-Offa, Ibadan after Ajegunle Baptist Church, Agbowo under the leadership of Revd Dr. Emmanuel Oyekan built a chapel there.
Professor A.C. Odebode has further demonstrated his selflessness through his topic of preference for his inaugural lecture taking place today (30th June 2016) at the University of Ibadan with the title, ‘Integrated Plant Disease Management: A panacea for food insecurity’. There is a drive in him to ensure that man’s existence is not hampered by food insecurity. This multidisciplinary title which cut across Botany, Agriculture, Human Nutrition, Geography, Soil Science amongst others is a reflection of his heart and the call to the academia to generate solutions that will further improve the quality of life.
According to the United Nations, Food security
The academic pursuit of Professor A.C. Odebode has just open up a new clime of research. As an expert in different areas such as Mycorrhizal, Plant Genetics and Pathogen Interaction; Post Harvest Pathology; Biocontrol through Antagonistic Microorganism; Use of Botanical/ Biofungicide; Virology and General Plant pathology and Mycology. All these fields have been consolidated into today’s expository inaugural lecture. I look forward to the Odebode theories, Odebode-ism; Odebode-logy and Odebode-cide that will be referred to be scholars globally.
Reference:
United Nations website
Olutayo IRANTIOLA
Lagos, Nigeria
(c)Olutayo IRAN-TIOLA, Lagos, Nigeria