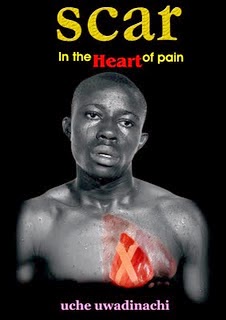 BOOK TITLE:  SCARS IN THE HEART OF PAIN
AUTHOR: UCHE UWADINACHI
PUBLISHER: VIRGILIS COMMUNICATIONS
YEAR OF PUBLICATION: 2009
NUMBER OF PAGES: 70
REVIEWER: OLADIPO KEHINDE
Scars are indelible marks rippled with pains and pangs of memory.  It is a pathetic incident or situation that affects the collective consciousness with pulsation of pains.
“In Heart of Pain” the poet writes: “Each turn multiplies a pain/ In the closest vein/ Another aching day/ Paralyzing the waking dawn/ With a new stitch/ The feelings make the heart to sing the song of anomie. These pains are political undertone. The heart bleeds in silence, hoping for a succor when the sun shines tomorrow to wipe away the tears of sorrow.  The situation is moribund.” This is a collection of poem with collective consciousness.
The people bear the grunt and the price of freedom is love.  Love is the soothing balm for arching heart.  It is the only panacea for the songs of heartbreak. Every scar tells a story which the memory cannot forget. “In the struggle against pain” the poet writes:  And this generation/ Cannot begin scavenging the scenes/ For traces of faceless littering carcasses / When history too is dead/ We can only recover fear/ There is a scar when things are not right and no one is asking a question.
Collective suffering breeds chaos and anarchy. Love is the bound of our existence. There is a scar in the heart when the promises of Eldorado have become an illusion. There is scar in the heart when situation is moribund.   Fear and insecurity are the harbinger of Scar in the Heart of Pain.  Cascade of tears from the eyes of the masses. They are spectators in the political arena. They listen and watch as the drama unfolds.
The collection of poems is in three movements namely: the curse, cure and course. The alliteration of the movements is embedded in the heart of pain. The curse is the calamity and casualty. “Selfishness is the greatest curse of the human race.
” William Ewart Gladstone. When one looks at people faces, one will notice things are not just right. The cure is to live and eat and let others do likewise.
In “A world of worries” the poet lament: A world of words/ Porridge of hopeful phrases/ In several dishes of religion/ There sweetness cures no hunger/ Only an after-earth nutrient/ Forsakes us in a world of famine/ It is only love that can bring that beautiful and peaceful bliss. There will be pain and upheaval when few people are living in affluence and opulence.
And the majorities are wallowing in penury and misery. The poet’s writes in “Heart against earth”: Together our souls shall stamp/ This concrete ground/ In fleet strides that beat anger; / Breaking its brick to grab concrete crops/
The river sings and dances endlessly. The poet urges us to make the best out of every situation we are facing as a nation. The poet’s opine in “The river” In its pure cleansing depth/ Reasons are regalia in blotches/ To be washed in the stream/ Our conscience thrives strongly in consciousness/ The course is the wheel of progress and togetherness.
A metaphor for Happiness River. We have to forget the past and look forward to the future.  The poet depicts the serenity of nature “In Heart of ease”: The river spreads/ Like mother blanket of hen’s wing/ Around earth’s naked surface/ Huhh…its curly little waves/ Create a resonance of rhymes/ Ushering water birds to play/ Soft songs of lullaby/ The river is a means of sustenance and we visit the river. The poet also gives tribute to River Osun in Osogbo, a venerable natural spring. The deity of the river is the goddess of fertility. Her festival attracts people from far and near with a national consciousness. The poet uses river in this segment as a metaphor.
In “Osun”  the poet’s write: Unsoiled to any earth tie/ Flowing generously for all/ Inviting us to thread/ New earth in water/ Where our mad pains/ Will be pacified and/ Taken away/ The river connects us together as one. The river belongs to us. When pain tears the heart apart, the only thing needed is love. The soothing balm of love will heal the land of it collective experience. Love will spring from that heart of pain. Let the rain of love fall and heal the land of all its pain.
Culled from: Compass Newspaper
(c)Olutayo IRAN-TIOLA, Lagos, Nigeria