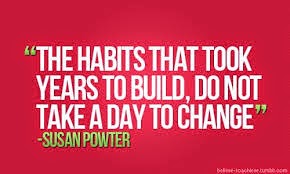 With this pidgin greeting do I come to you this great Monday morning. Hope you had a nice weekend? Well, activities that I had to battle with for the weekend was overwhelming but I thank God; I am refreshed for the new week.
I have a friend who was introduced to smoking when he was waiting to be admitted to a tertiary institution of learning. He had the opportunity of mingling with the wrong set of young men and he started smoking. At a point, he wanted to break the habit, he struggled for three months and he did not smoke. He longed for it, he returned and in fact, the number of stick he consumes daily increased. Today, we are taking about the word, habit. So simple but let us look at the two sides of this word.

Picking Up a Habit is the point wherein one decides to do what he does not do prior to that time, mostly habits that are picked are not positive. Do not get me wrong, there are positive habits too that can be learnt but mostly, it is negative. Habits become part of one’s daily life. Habits can be learnt through peer pressure, parental influences and from relatives. Some habits are learnt online, just like people joke in recent times about the availability of all answers on google except one’s future. One major deterrent to the habits exhibited by people is their religion tilt. After these habits are picked, they become the basis of one’s attitude and lifestyle. For example, someone who is learning to smoke might firstly experience coughing before graduating fully into the attitude.
Breaking the habit is a tasking job. It is easy not to pick up a habit than to break it. Like the maxim goes, “it is easier to train boys than to mend men”. Breaking a habit can be at the verge of threat to life. Breaking a habit, at times, involves psychotherapy. Breaking a habit might involve those who were not a part of the habit-picking process, when such habits lead to sickness. Breaking a habit might cost a fortune and can be a long walk to change.
What habit have you picked and you are sure it is injurious to your health? What habit are you showing to children who believe that whatever you do is the best? What habit do you need to break? What habit is posing a threat to your relationship with others? What habit has debased you before others? Picking the right habits and say NO to wrong habits.
As for me, I will do my best not to pick habits that I will want to break or crush sooner than later.
Have a week full of favour.
Cheers!
(c)Olutayo IRAN-TIOLA, Lagos, Nigeria