Articles
October 24, 2012 by Peodavies_office
0
On a queany weathered day, I was willing to change my location within the hostel. It was cumbersome for me alone, no friend to help. At last, I had to resort to finding “omo onise”. I got two immediately, poverty has brought this children to a state of abuse, they ought to enjoy the best of education, good food, good clothing and be confident that someone is fending for them.
The two “omo-onise” were of the two sexes. When they climbed up the stairs, the boys willingly offered to carry the heavier of the two bags, the girl was shocked! They moved, the boy left before her and as they were going, he was thankful to her, I wondered.
My torch dropped off the bag the girl was carrying, the boy asked softly, “what dropped off?” I had gone ahead of them but my attention was called by the sound. I heard the boy saying, “take it easy so that we would not go unpaid if any of his wares gets damaged”.
At last the assignment was completed, I paid them collectively. I was anticipating that the boy would complain  that he would collect more as compared to the girl but he shared the money equally.
How great would the love of a man be for His wife, if he cares for her all his life, if the gains and pains of marriage are equally shared, if their family has not victor and no vanquished. THINK ON THIS! 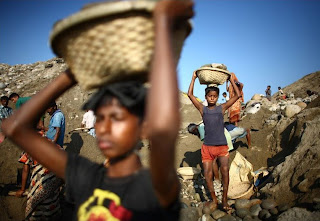