September 24, 2016 by Peodavies_office
0
The Kenyan author’s story The Upright Revolution: Or Why Humans Walk Upright is ‘the single most transla 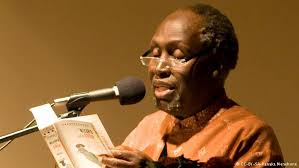 ted short story in the history of African writing’

A fable by the major Kenyan author Ngũgĩ wa Thiong’o has been translated into over 30 languages, making it “the single most translated short story in the history of African writing”, according to its publisher.
Pan-African writers’ collective Jalada Africa released its latest issue, focusing on translation, last week. It includes Ngũgĩ’s story Ituĩka Rĩa Mũrũngarũ: Kana Kĩrĩa Gĩtũmaga Andũ Mathiĩ Marũngiĩ, which the award-winning author originally wrote in Kikuyu, a Kenyan language, and then translated himself into English asThe Upright Revolution: Or Why Humans Walk Upright. The fable tells the story of how “a long time ago humans used to walk on legs and arms, just like all the other four limbed creatures”, but how “their rhythm and seamless coordination made the other parts [of the body] green with envy”, and “they started plotting against the two pairs”.
Jalada says it worked with translators of “all levels of experience, from a recent high school graduate to distinguished professors”, to pull together its huge range of translations of Ngũgĩ’s story, which is available in Amharic, Dholuo, Kamba, Lwisukha (Luhya), Kipsigis, Kinyarwanda, French, Arabic, Luganda, Kiswahili, Afrikaans, Hausa, Meru, Lingala, IsiZulu, Igbo, Ibibio, isiNdebele, XiTsonga, Nandi (Kalenjin), Rukiga, Bamanankan, Lugbara, Lubukusu, Kimaragoli, Giriama, Sheng, Ewe, and Naija Langwej. It is now looking for writers and volunteers to volunteer translations in further languages.
Ngũgĩ said the project would “empower Africa by making Africans own their resources from languages – making dreams with our languages – to other natural resources – making things with them, consuming some, exchanging some.”

“The moment we lost our languages was also the moment we lost our bodies, our gold, diamonds, copper, coffee, tea. The moment we accepted (or being made to accept) that we could not do things with our languages was the moment we accepted that we could not make things with our vast resources,” said the novelist and playwright.
Jalada is now planning to periodically publish a Translation Issue featuring a previously unpublished story, which it will ask writers and translators to translate into their own African language. Its ultimate goal is to translate each story into 2,000 African languages.
“Despite long-running conversations on the need for publishing in indigenous languages on the African continent over the past five decades, writing and translations remain minimal and the little that exists continues to rapidly decline,” said the writers’ collective. “There are millions of speakers in African languages and not many writers in African languages. Why? Can this be changed?”

Read more
Managing editor Moses Kilolo, in an introduction to the issue, said that Ngũgĩ was “uniquely placed to be the first distinguished author and intellectual featured in our periodical Translations Issue” as he “has, for many years, been the most vocal proponent in publishing in African languages”. Kilolo said that the story itself was “a reminder that we are one, and that in our togetherness we have the power to transform the future that we hope for ourselves”.
“For many of these translations, Jalada was very fortunate to find willing editors with considerable orthographical knowledge of their language’s textual application. In most cases, translations were further read by native speakers to ensure fidelity to the original piece. Although deeply rewarding, none of this was easy, and this Translation Issue is the fruit of many months of hard work and collaboration, multiple deadlines and setbacks,” Kilolo writes.
“Like all art, there will be growth from these humble contributions in which we take immense pride, to a future literary landscape of beautiful constructions that will be definitive of each African language. Jalada has come to be Africa’s literary melting pot where we meet in a blend of the Anglophone, Francophone and Lusophone expectations over a distinctively African base.”
Culled from the The Guardian
(c)Olutayo IRAN-TIOLA, Lagos, Nigeria