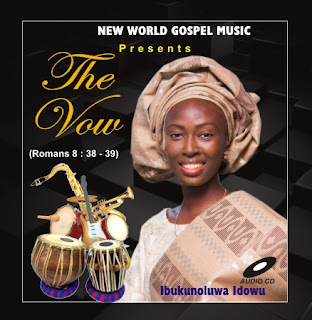 Album: The Vow
Number of tracks: 6
Year of album: 2016
Produced by: Abiodun Oni
Name of Reviewer: Olutayo Irantiola
The Yoruba genre of gospel music had been in dearth of originality in the recent past, however, Ibukun Idowu in the album titled ‘The Vow’ demonstrated her understanding of the gospel using Yoruba culture and language.
The first track opens with a short praise chant which was led by bata drums. Then, the track opened properly in a well orchestrated rhythm. The track is a description of the need to rejoice in the Lord at all times. The dexterity of the singer was shown in her ability to add some English twist to the track and it flowed with ease with the support of the talking drum. The 14 minutes long track is a transition from why God should be praised; to the staunch believe in God and the pleasure derived from consistently worshiping God.
The second track titled ‘Omo Oba’ is of the highlife family that is garnished by the horns as required. The track is an encouragement despite the challenges experienced in the world. The artiste motivated her listeners to rejoice which is a sign of hope by praying to be victorious and successful regardless of the storms. As evident in reality, it is only a motivated person that can stand up to confront the enormous challenges of life.
What is the gospel if there is no call to salvation, Idowu in the third track titled ‘Ireti Ogo’ appealed to people to come to the saving knowledge of Jesus Christ because the Lord’s appearance is fast approaching. With faith and assurance, she affirmed her goal of being with the Lord at his coming. Some of the good things that are experienced in Jesus include heavenly hope, eternal life, eternal joy and eternal rest.
The fourth track titled ‘Ibukunoluwa’ can be called a realisation of her name which means God’s blessing. According to the track, after much toil, God has granted her abundant blessing and victory. People can stare at her because of the blessings that have come her way. There was rap in Yoruba that further reinforces the blessings of God all-around the artiste which was only done by God.
The fifth track titled ‘E darasimi’ can be considered as the aftermath of experiencing the blessing of the Lord which is the resolution of the artiste to tell the world of how good the Lord has been to her. Just like Joshua, she made her vow that, ‘as for Idowu and her household, they would worship the Lord’. She concluded the track by imploring people to rise and join her in praises to God.
After experiencing her love and commitment to God, Seun and Ibukunoluwa Idowu came together to discuss their ‘Vow’ to one another in a duet; the last track is short but insightful. The track is like a conversation between them, the song states the duty of both parties. They reminded themselves of the love, commitment, promise and vow that they have started.  They ended by encouraging one another not to allow a third-party into their relationship.
The proof of the pudding is in the eating. You can enjoy the lyrics, the rhythm, the encouragement, the love and the firm belief in God, if you get a copy of the album. I recommend it to those interested in pure and original gospel songs that uplift the soul.