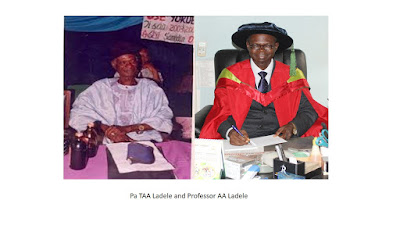 The scion really has a lot to do with the whole bunch. Chief Ladele was the headmaster of my grandpa in the 1940s. My grandpa would always say, “I am his first child”. I would also say that the same thing happened to me, I did not reside with today’s celebrant but I have sapped from his wealth of experience accumulated over the years. He was one of those that helped me during my admission into the University of Ilorin, he gave me a note to his dear friend, Prof Omotesho. Today, he serves as one of those who had encouraged me academically and also mentored me.

As a teacher who has celebrated over 30 years in retirement, Chief Ladele is a strict disciplinarian and this is also visible in his son, who would not tilt towards any party except it is for godliness, he is a disciplinarian too who will not tolerate non sense and he is a stickler for excellence. He belongs to the silent transformational school of thought that does not compromise but does everything in an orderly way, such an accountable person evident in his tenure as the HOD of his department.

The Faith of Our Fathers in Professor Ladele is not any different from that HIS FATHER. The residence of the Ladele’s at Oyo has a baby church called Union Baptist Church, Professor Ladele is a Pastor in the Redeemed Christian Church of God. This shows that the upbringing of a child would reflect wherever he is and no matter what he does. Another way of seeing the father in the son.

This is coming more at this time when Chief T.A.A Ladele now has his son as a Professor. As a writer of the JE N LOGBA TEMI fame and other novels. Chief Ladele distinguished himself as a writer and author in the education of the South-Western Nigeria and till day his name cannot be wiped off the lips of those who schooled in the 60s and 70s. He has also done a lot to preserve history for the coming generation by being part of the historical committee of the his home town, Okeho (Oyo North, Oyo State) churches in the community and he happens to also be a part of the Council of Elders in the town, his son too has distinguished himself by supervising many PhD thesis, Masters’ thesis and first degree long essays. He has in no small measure contributed to the Sociological studies in the area of Agricultural Extension and Rural Development as an Editor, he is one of the directors of Farm Infrastructure Foundation, Ibadan. There are many articles to his credit both in local and international journals.

In resemblance, Professor Ladele is not as tall as his father but the facial identity cannot but be mistaken. Professionally, the headmaster of the 40s was not only respected but also at the peak of his career, today the son of that old headmaster is now a Professor, also at the peak of his career. We celebrate his success and failure, his ups and downs, his days as protagonist and as an antagonist, his granted desires and his wishes that have not come to be, these are elements that make a man imperfect. May you soar higher in this capacity beyond the boundary of our nation, Nigeria