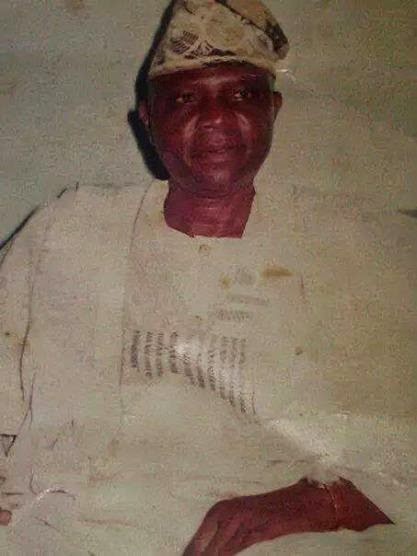 I have a long stretch of story that people can learn from the 42 years of contact that was before the exit of Revd W.O. Omolola. In 1962, when Bro Johnny Okesiji and Bro W.O. Omolola were seminarians, Bro Omolola sent Bro Okesiji to help buy a wristwatch from . On getting to , the wristwatch was much cheaper than the amount Bro Omolola booked for it. LITTLE DEEDS SPEAKS FOR LONG.
In the month of May 2002. I was almost stranded in . I asked the mechanics at Agbo-Oba of the location of , . They consented and described the place. When I got there, I told him I was John Okesiji’’s grandchild. He asked me a few questions. With trust, he made me feel at home, Abel and I became friends immediately. I passed the night and got home to tell the story of how I passed the night. That was how I had the Omolola’s as my guardians in .
Just as if nature was expecting this little gift, he blessed Sis Inaolaji with a job at Oyo town. Although Revd Adedapo, Revd Omolola’s friend and colleague in the seminary, stay in Oyo she stayed with my grandparents. How glad I was knowing that THE WORLD IS A MINI STAGE. She will enjoy the largesse just like I am getting from her parents here. However, her stay was brief but I learnt a lesson: THE SAME STONE THROWN HIT SOMEONE OF YOUR HOUSEHOLD SOONER OR LATER.
January 2005, Revd Omolola retired honourably from the services of the Nigerian Baptist Convention and the pastorate of FBC, . I felt like an orphan for ten months that I spent behind in . I had had friends but they were inadequate to do what this family did, I realized I was becoming an adult. I learnt a lesson DO WHAT YOU CAN DO WHEN YOU ARE AVAILABLE AND WHEN YOU ARE NOT WE FEEL YOUR ABSENCE.
In 2006, I was challenged to start the collation of my Grandpa’s biography. I sent my cousin Tobi Ewekeye to get to the residence of Revd Omolola at and he got his contribution for me. If I had not attempted to ask, he would have gone with what he knows about Revd Okesiji. His handwritten piece I value so much now. I learnt another lesson; DO NOT LEAVE TILL TOMORROW WHAT YOU CAN DO NOW, NO PROCRASTINATION.
I have celebrated with the Omolola’s at least four times; I have been absorbed into this family. Egbon Lolade is truly a big brother. Let’s come togther to take care of his lovely wife. She prayed endlessly for him, stood by him through thick and thin, a mother indeed, blessed among women! I had learnt from the years I was not yet conceived, lest since I was born, learnt from meeting people and learnt more at someone’s depature: rest well, great soldier and father, Revd William Oladiti Omolola.
Olutayo IRANTIOLA
For Revd J.A. Okesiji and family
3.45A.M, 10th May, 2007
(c)Olutayo IRAN-TIOLA, Lagos, Nigeria