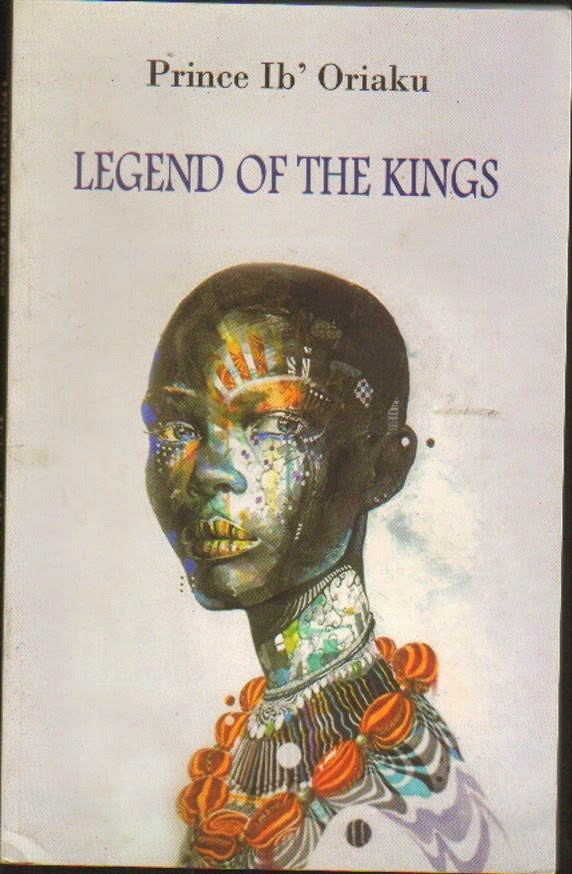 Title: Legend Of The Kings.
Dramatist: Prince Ib’ Oriaku
Genre: Drama
Publisher: Kraft Books Limited
Pages: 187.
Published: 2014
Reviewer: ‘Debayo Coker and Olutayo Irantiola
It is very important to have a new dimension to the creative industry. I was challenged by the quality of work done by Oriaku in the way he fuses poetic conversation into a play and he was able to open up the dramaturgy of the Niger-Delta region of the country.  The story started with narrations from three troubadours before the entrance of a high priest, Talebearer, who laid a somewhat opening into the main drama.
I would want to sum up the play in few sentences, Boka is the reigning King of Kirikese Kingdom, who received the announcement of the birth of a set of twin with so much melancholy. One would have thought that he should be happy for the eventual safe delivery of his sons through the help of a midwife after some days in labour by the Queen. A high level of anxiety was raised through the dramatic element of suspicion when it was not clear why the boys, their mother, and the attendants to the Queen which included a white Midwife were all damned to be killed as pronounced by the gods through their mouthpiece, Ikaki, the priest. One would have thought it was an era where twins were referred to as strange births and therefore should be killed but far from that school of thought as the drama later unfold at the climax that King Boka had  in his hey days eloped with the bride of a water spirit, Efereya, who was obviously angry and subsequently placed a curse on Boka which made him impotent and Boka in order to prove his virility to his subjects had deceitfully employed one of his maids to impregnate his wife which further put him under friction with the forces of the gods. The boys were separated through some mischief, one grew up in the palace, Fibika, and the other, Ekwenji, grew up in the creeks and became a pirate. Forces of nature brought them together and their eventual doom was brought to the fore as already proclaimed by the gods. A tragedy of note.
A lot of symbolism was employed in the drama. Boka symbolizes proud and deceitful leader who knows what the exact problem was but rather than address the issues imbibe some rigmaroles; more often than not do our leaders know the major issues as affecting the lives of their subjects or citizenry but rather they engage in some politicking at the detriment of the masses. Captain Allen symbolizes a typical business man whose major interest is his profit, such merchants go about festering confusion amongst the people, even to the point that the more the bloodbath the greater their profits. Such deal in ammunitions and the best way an arms dealer profit is when there is a war. Ekwenji symbolizes some people we consider as social misfits, most often than not, we fail to realize that some of those people are victims of circumstances. Ekwenji is a strong character, a great lover, a human right activist. Ere symbolizes true love that readily withstands all weather, rain or shine, even unto death.
The setting of the drama is Ijo wetlands of the early  18th century precolonial Niger-Delta as the different wars, businesses and costumes sufficiently point to that. The two kingdoms that are ascribed to in the play are Kirikese and Okoloma kingdoms. The folkloric tradition of the two(Riverine ) kingdoms is richly exlored that hardly did any scene pass without being interspersed by different traditional songs of the locals. The palaces of the two kings, Boka and Okparanjali, are built to reflect the grandeur of the royals in traditional African setting. This book can be said to be a furtherance of the great works written by Professor John Pepper Clark-Berekedemo and other prominent writers from the region.
Some of the thematic tilts of the book include; deceit, greed, chivalry, betrayal, oppression, love, good leadership and neighbourliness. The story is written with sublime expressions grilled in poetic artistry and deliver with an exceptional theatrical tone.
It is an exhilarating drama with each moment furthering a heighten curiosity and demanding foreclosures on seemingly loose ends. It is a very good recommendation for every love of good drama. In addition, every drama has songs infused into it, Oriaku has taken time to add 21 songs and the interpretation in English. As such, even when the drama is being performed by Niger-Deltans, the songs can be interpreted by the Director for adaption into the new language community.
Some of the defects found in the text include: very long scenes; the “Queen English” being spoken by the locals and the whites speaking about the “gods”. Oriaku has done the Niger-Delta proud with this publication and hopefully, this will not be his last contribution to the body of literature from the Niger-Delta.
(c)Olutayo IRAN-TIOLA, Lagos, Nigeria