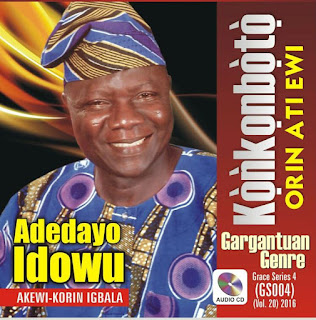 Artiste: Adedayo Idowu
Number of Tracks: 5
Year of Release: 2016
Reviewer: Olutayo IRANTIOLA
There is a general misconception that there are some vocabularies in English that cannot be translated or transliterated into Yoruba. This was one of the things addressed by Adedayo Idowu in his new work titled Konkonboto which he translated as the Gargantuan Genre.
Adedayo Idowu has evolved with time because the opening track of the album has a contemporary tune with a slight blend of rap. The track, ‘Ori Mi ko Buru’ is a song of thanksgiving that God has prevailed in his life and that has not given the enemy an opportunity. The poet cum singer was also optimistic of his ascension with Jesus at his appearance and he urged all those who want to reign with Jesus to accept him and eschew sin.
The second track which is 18 minutes long is an exposition on the happenings in the church. He made a reference to the past album titled ‘Ara Jesu ko ya’. In the track, he made it known that his song is used to address the decadence in the church. As a Yoruba man, he described the church as ‘a rotten orange’. The role that the church is expected to play in the society has been corrupted. The track makes reference to the Bible when Jesus sent out money changers in Mark 11:15. There are different analogies of the atrocities committed by Men of God.  He rightly described that many followers of the ‘devilish’ ministers do not equally want the truth. He believed that the actual men of God will be known by their deeds.  The poet gave a vivid description of the qualifications of a minister of God as written in the book of I Timothy, Chapter Three.  Other atrocities committed in the church include abortion, adultery etc. He lampooned the denominational segregation; he explained it in English, thus:
‘ Jesus Christ has nominated us for Heaven but we are denominating ourselves. Hence, we have innumerable denominations and the spirit of denominationalism has demoralized the church.
Therefore, the church is critically sick and is drastically dying. Oh! Lord save the church’
He went to explain the trend of Pentecostalism that can be called Pente-rascalism. According to him, anointing oil as written in the Bible was used just twice for healing. The church is being humiliated because of the glory attributed to the ministers.
The third track is a contemporary Apala gospel titled, Eni Taye Ye Lo Datunbi. This track is a reminder of the need to be born again and concentrate on making heaven. He mentioned that his joy is filled whenever he is in the house of the Lord which is in tandem with the words of David in Psalms 122:1. As for the poet, there is no reason to be enticed for material gains. He noted that the stings of sin are very disastrous; he mentioned different sins and Bible characters that had unfortunate end like Samson.
The fourth track is titled ‘Ayipada Tooto’ is a called to the change that God is expecting from man. He said the change that every man needs is to change to godliness and righteousness while Nigerians need to change from being corrupt. In his exact words,
‘the honourables dishonouring themselves’; the respected disrespecting themselves;
the exalted debasing themselves; the valued devaluing themselves;
the graced disgracing themselves falling from grace to grass; exhibiting shows of shame; they need to change’
The track is an address of the political situation of the country. He implored political leaders to have a change of attitude; women to have a change of attitude. Other people that were not left out include students; teachers; masters; traditional rulers; traders; fuel attendants; journalists; civil servants and nomadic Fulani cattle rearers which he addressed in Hausa language and virtually every strata of the society. He implored everyone to turn to God.
The final track of the album is an encouragement to everybody titled ‘Erin’ however with moderation. The song is equally a plea that God should make use rejoice. The benefits of laughter were enumerated. He summed it up with the Biblical example of Abraham who laughed.
This is an original work of a gospel performer poet who has rendered his poetry in a corrective way for everyone who wants to hear the truth in tunes. He was able to code mix in a very attractive way. This great piece of music is recommended to everyone who has the desire for ingenious and meaningful music. This is another quality product from OKEHO!
(c)Olutayo IRAN-TIOLA, Lagos, Nigeria