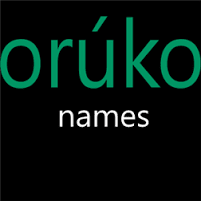 I was drive to write on this title because I found two names in the Bible and it kept me thinking. There are many people that have names that they either do not know the meaning, not living according to the meaning or acting below the confines of that name. We the Yorubas believe so much in the meaning of names as such we say, “oruko n ro ni”. No matter your name, God can change it.

AHITHOPHEL: the name means brother of ruin or folly. In the book of , the man tagged fool has the ability to counsel,  “which he counseled in those days, was as if a man had enquired at the oracle of God”. 2 Samuel 16:23. This shows how much God has given him a distinct character that supersedes his name. He misbehaved and his name started manifesting in his life. 2 Samuel 15:31 says, “And one told David saying, Ahithophel is among the conspirators with Absalom, and Davis said, O, Lord, I pray thee, turn the counsel of Ahithophel into foolishness”. If there is any great virtue in your life, the devil would want to take it away through SIN of any type. Remember, Samson also.
JABEZ: the name means “I bore him in sorrow” 1 Chronicles 4:9. Imagine why a mother would give such a name to the child but it reminds me of a fact as said by Jesus in the book of John 9:3, “but this happened so that the work of God might be displayed in his life.” Jabez could not show forth the honour that God has bestowed upon him until he prayed. Whatever virtue that you have needs to be polish with prayers.
ABRAHAM & SARAH: means father of many. His previous name Abram means high father. God had to change his name as he journeyed into higher realm in his work with God and to assure him that he would be the father of many nations regardless of the time he is starting. Sarai means contentious while Sarah means Princess. Her story had been filled with contention until when God decided to make her a Princess. For you and I, we would not just be a high father and a contention person but we would be father of many nations and a royal person. This shows that in your work with God, you can make a great difference
SAUL TO PAUL: We would look his mission and before meeting with Christ and when he met Christ. This means, God can change our missions with in life. All we need is to willingly allow his leading.
The course of your life is not within your reach, “My times are in your hands; deliver me from my enemies and from those who pursue me” Psalm 31:15. Surrender the totality of your being to God, the totality of your life and he would take you to your promised land. If you realize your inabilities and you hand over everything to God, he would help you. He is the only person who can change your name to another one that will move you forward. God can change your story for good!
(c)Olutayo IRAN-TIOLA, Lagos, Nigeria