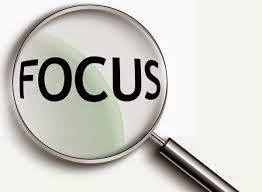 Ndi beanyi
I hope your day has started in a memorable way? It was a weekend full of activity for me and I hope you enjoyed yours as well. As I do regularly, I greeted you in Igbo language of the South-Eastern part of Nigeria it means “my people”. May this week be a blessed week for everyone.
There is story about a blacksmith; the man was tenaciously hitting a particular spot as he was trying to get a shape out of the metal that he was casting. He did this till he got the desires result. Two things happened thereafter; his apprentices understood that their boss had a particular shape in mind he wanted and his customers saw his craft as distinct from what his contemporaries did. This led to this Yoruba saying: “Alagbede to n lu irin loju kan na, oni ohun to n wa”
Focus is the concentration on a particular act, direction of youthful-energy towards a particular task with the mindset of making a difference. Focus is best when particular attention is paid to activities that excite one and makes one fulfilled. There are many people who do what saddens them daily but when they cast their minds back, they would be able to definite what gives them a sense of fulfillment.
Out of focus can be aptly described as jack-of all-trades. Such people want different things at different times. As such, when friends who had giving their best shot at a focused activity have advanced; they might still be on the lower rung of the ladder or not made good success. I am not an advocate of becoming great suddenly but I believe in a systematic approach to the lofty heights of life.
I want to get focused as the year rolls by; get determined and pursue vigorously a career path and excel therein, what about you? Do not drift off your field of nobility after discovering it. It is definite that many things would continually contend for attention but like a friend once told me; do not say yes to every good idea. Think about it, get focused or keep being out-of-focus.
Cheers!
Olutayo
(c)Olutayo IRAN-TIOLA, Lagos, Nigeria