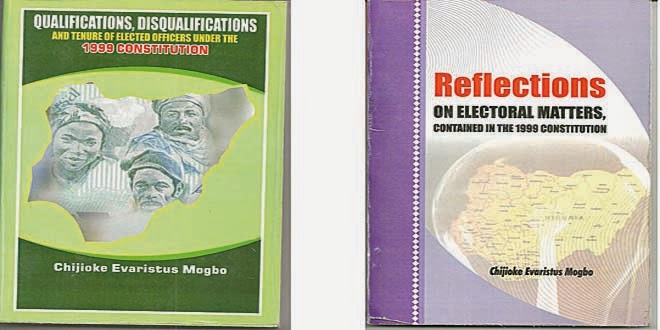 Titles:  Qualifications, Disqualifications and Tenure
of Elected Officers under the 1999 Constitution.

Reflections on Electoral Matters contained in the 1999 Constitution
Author:  Chijioke Evaristus Mogbo
Reviwers:   Ikechukwu Ezechukwu (SAN) and Ifeanyi  Nrialike Esq.
With the 2015 general elections barely two months away, the question of the eligibility of candidates, which is always a sore point during electoral contests, is dominating public discourse in the country. Fortunately, an attorney, Barrister Chijioke Evaristus Mogbo, has decided to enter the fray with two very important books that seem to provide profound
answers to the delicate question of President Goodluck Jonathan’s eligibility for the 2015 presidential election, and also has the capacity to effectively resolve the raging controversy over the continued stay of the Rt. Hon. Aminu Tambuwal as the Speaker of the House of Representatives, amongst other contemporary matters.
One of the books, Qualifications, Disqualifications and Tenure of Elected Officers under the 1999 Constitution, appraises and reviews the provisions of the 1999 Constitution as they relate to qualifications and/or disqualifications of persons seeking elections into political offices. The book under review also appraises and reviews the 1999 Constitution as it relates to
the tenure of office of persons elected into positions of authority in the Federal Republic of Nigeria. In an important detail, the book takes on provisions of the 1999 Constitution in a piece meal manner, x-rays them, and then brings to the fore problems of interpretation and their suggested solutions.
A retrospective study of the contents of this particular book brings to bear an indispensable necessity for reforms of not only our electoral process, but also our electoral foundational laws, as contained in the electoral act, and most importantly, the constitution. The electoral act and laws are subjugated to the constitution, and no matter the reforms and amendments that are brought to bear on the electoral act, the nation cannot go far as long as there are constraints in the constitution militating a against the amended provisions in the electoral act.
The important task Mogbo’s book has addressed here is the presentation of submissions on the issues raised by some of the amended provisions in the electoral act, including predictions and prophecies of what the courts may do, if and when faced with the need to adjudicate on current electoral problems.
Mogbo’s second book, Reflections on Electoral Matters contained in the 1999 Constitution, which is a sequel to the first book appraised above, takes on new developments in the polity as they relate to electoral and constitutional matters since 2007, and offers incisive and profound views and submissions on all the cases reviewed. The author, in this second book, also
foraged for the most recent cases that impact the provisions of the constitutions in respect of electoral matters, and suggested solutions that are unique to the various situations. The result is that Mogbo has thrust unto our hands a foundational and fundamental anchor that has the potential of ensuring that Nigeria’s democracy does not falter or die.
The high points of this second book are located in chapters three and five; chapter three deals with the tenure of the Nigerian President. The book makes the point that it is the inability to differentiate between the phrases “term of office” and “tenure in office” that has engendered and sustained the controversy as to whether President Jonathan, for instance, is currently
doing a first or a second term in office. According to this book, a “term of office” is a whole, and can be counted in terms of first, second or third term of office, while “tenure in office” talks about the duration of a term, and it attaches to particular persons as they take the oath of office.
In this wise, the salient feature of the above distinction which this book makes is that if, for instance, a Nigerian president dies in office, during his first term in office, his remaining tenure is required by the constitution to be served out by the vice-president, but this vice-president is not deemed to have served any term of office. If this vice-president that has
turned into a president thereafter runs for president in a general election and wins, he is sworn in to serve his first term of office. Can there be any more profound treaties to a problem that is threatening the political stability of this country over President Jonathan’s intention to contest the 2015 presidential election than this offering from Chijioke Mogbo?
In chapter five, the BOOK DEALS

with the issue of cross-carpeting which at the moment is threatening to undermine Nigeria’s democratic process. Mogbo’s book brings a profound perspective to the issue of cross-carpeting in Nigeria. The book insists that a “division in a political party” is a question of fact, not law, since there is no legal definition for the phrase in
the constitution or the electoral act or any other law. Of course, as a way out of the problem, the book suggests that a “division in a political party” can be defined and deduced from the proportion or ratio of the registered members of a political party who veer from or are averse to a decision or a position taken by the party. Accordingly, the book maintains that “if the proportion of the registered members of the party who are averse to the party’s decision is infinitesimal, then there is no division.”
With a stroke of intellectual genius, the author of the book, Barr. Mogbo, solves the problem of defection in our political system for which courts, with even equal judicial powers, are busy giving conflicting judgments. With a plethora of cases coming up over the issue of cross-carpeting, especially given the tension in the polity over the defection of the Speaker of the
House of Representatives, Rt. Hon.Aminu Tambuwal, from the Peoples Democratic Party (PDP) to the All Progressives Congress (APC), the nation has no other option than to approach Barr. Mogbo’s “Reflections on Electoral Matters” for a peaceful and commonsensical resolution of the crises that always comes up whenever legislators defect from the parties that sponsored them in elections to other parties where they think their political bread will be buttered.
In all seriousness, Barr. Chijioke Mogbo’s two books are a gift to this nation. The books are a formidable effort in the area of constitutional law. The cases cited, the analyses presented, the postulations and submissions made, some of which are ingenious, are worthy of note and commendation. The two books should be compulsory reading for scholars, lawyers, justices, politicians, as well as the enlightened public. The two books are clearly effective tools that have the capacity to help democracy thrive better and flourish in Nigeria.
·         Ikechukwu Ezechukwu (SAN) and Ifeanyi Nrialike Esq., are solicitors with Ikechukwu Ezechukwu, SAN & co, Ogbueli Chambers, 2A Tanga Street, Zone 6, Wuse, Abuja.
Culled from-Newswatch Times Newspaper
(c)Olutayo IRAN-TIOLA, Lagos, Nigeria