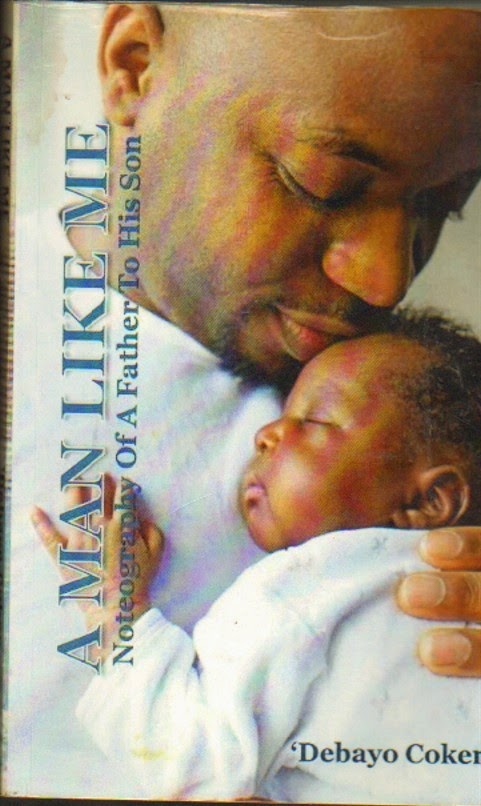 Title: A MAN LIKE ME ( A noteography of a Father To His Son)

Author: ‘Debayo Coker
Pages: 153 pages
Published: April, 2014
Reviewer: Olutayo Irantiola
There comes a time in the life of a young man when he ascertains his manliness when he gives birth to a child after marriage. As Africans, a man is extremely proud when he has a son. This led to the foray of ‘Debayo’s writing as a father to his son. The 153 page-book is about an expectant father who went on an “adrenaline flight”. His desire was to write a short note on social media pages but the flow culminated into a collection of notes.
Although, ‘Debayo calls it a note, I see it as a letter. Each of the note ends in a sign off. As he wrote in the book, Debayo’s first son was born in 2014 and he wrote this book in a futuristic manner; this book has all the desires of a father to his son.
There are many instructional advices that are essential for living which include continuity of family traditions. ‘Debayo wants his son to teach his children what he has been taught by previous generations. He states that, “My mother was a very positive influence on me, I wish you had met her but don’t worry I will teach you all she taught me” page 9.
Unfortunately, his wife too had lost her father but from her account written by ‘Debayo, “my PD caould not stop telling the story of how her father would come pick her from school, bare her on his shoulders and talked with her as they walked back to his office… I love that act and since your maternal granddad is no more around to do that for you I will be helping him out” page 12.
Another advice for the son is putting God ahead in all things. This he mentioned using Biblical allusion in the book, there were 4 Bible verses mentioned, the parable of the talents, wealth that develops wings, story of Joseph, Pharaoh, Saul, Nebchadnezzar, Joshua-like courage.
‘Debayo encouraged his son to volunteer for the collective good of the community. This was through his involvement in Environmental sanitation in their locality which comes up on the last Saturday of the month in some states in Nigeria. This is mentoring by examples.
Respect for everyone is also an advice for his son. Everyone has the trait of getting so full of one another but with such advice, the son has been taught humility. This was illustrated in the story of Aunty Kore and Uncle Charles.
Every child must be taught about responsibility. ‘Debayo made his son know some area that he needs to be responsible: in his dressing, in his academic pursuit, in handling properties, to adults and to humanity.
Parental discipline is crucial in the life of a child. ‘Debayo was able to portray that discipline goes beyond caning a child; he checked his son’s school bag to find an x-rated magazine there. He advised him against taking things from classmates. Similarly, he warned his son against unauthorized borrowing out of books from his study, this will be sanctioned by purchasing the missing books from his pocket money.
Realities of life was shown in the book through wrong exposure, loss of jobs, disaster, sickness, drunkenness, suffering, psychiatric challenges, teenage pregnancies, premarital sex, rape of a daughter by her father, gays in boarding schools and stealing of other’s items.
‘Debayo narrated a part of his growing up to his son, which shows the desire of a father that do not want his son to repeat the same mistakes that he committed while he was young. He, thus, laid bare his life before his son and got so close to him. The closeness helped his son to be free to tell his father everything about him. His father was able to detect his interest and helped him to pattern his life towards it.
The chapterization of the book deals with each topic per time, but it would have been expected that the chapters become longer because the young man has matured beyond short notes. It would have been expected that the chapters become longer from the time in which the young man got into Secondary school.
Although ‘Debayo attempted to answer questions that would have been asked by his readers.  The responses of the boy to his father’s notes. “In the meantime, I want to seek your permission to do a compendium of your responses to the notes I have written to you so far.”
‘Debayo knows that writing in another language in a book, the work must be italicized and also have the tonal marks. Yoruba language is tonal; a single word can have different meanings, for a reader of Yoruba language. The tonal mark is very essential. These are the proverbs in the book:
i.                     Ile laa wo kato somo l’oruko-page 16.
ii.                   Ti omode bamo owo we oni lati ba agba jeun-page 103.
Likewise, there are a lot of Yoruba proverbs and sayings that would have embellished the book for global relationship.
Some of the missing gaps in the book also include, details of the siblings are very sketchy, and the detail of the son’s dating, when they met her parents and the eventual marriage. Every man feels greatly accomplished when his son is getting married, the age of the son at the time in which he got married, he is about 18 years old and name of the granddaughter. However, this is allowed for the reader to fill such gaps.
Despite all that has been said, this book is well crafted, direct and engaging. Every growing child should have this as a handbook to guide in the journey of life. As a father, are you true to your son as
‘Debayo made everything plain to his son? There are a lot of lessons to learn from this book which transcends ethnicity or gender.
(c) Olutayo IRANTIOLA
21st November, 2014.
(c)Olutayo IRAN-TIOLA, Lagos, Nigeria