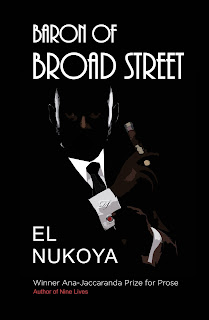 The critically acclaimed author of the best selling ‘Nine Lives’ and winner of Ana-Jacarranda Prize for prose, El Nukoya, has penned a new book titled ‘Baron of Broad Street’ to launched on the 2nd of August, 2015.
The book chronicles the polarized worlds of the Lagos impoverished and the affluent, living side-by-side, yet a world apart. It captures the limited prospect for mobility in an often negligent society, and the determination of a select crop of youths to take it upon themselves and change this seemingly rigid equation, by all means necessary.
Disun Falodun and his bosom friend Ige are young boys growing up within the squeeze and squalor of Makoko. As they sit on the banks of the Lagos Lagoon, they contemplate life on the other side of town, the exclusive district of the Metropolis covering Ikoyi, Victoria Island, and, Broad Street that mysterious area, so distant, yet so close. Disun is the optimistic of the duo, resolute in his faith in a fair chance at success in Lagos, his ordinary background notwithstanding. Ige, on the other hand held by a vibrant, radical mind reasoning that the expectation of a fair chance was utopian, entrenches himself in the firm belief that the only reliable choices open to them were illicit. The road to realizing this ambition is lined with real dangers. Would they prevail? And if indeed they would, what prices are there to be paid…and, perhaps, more importantly, of what texture would their residual soul be?
“The book focuses on contemporary Lagos; Conflicts (of a different kind – class, culture, identity, moral); Consciousness; a fresh conversation about who we are and a daring confrontation of the realities thereof.”  Said El Nukoya
Written over a period of seven years, El Nukoya’s new book has received several endorsements and many accolades from the literary world.
Beautifully constructed! El Nukoya brings places alive with such well-chosen words. I can see the scenes and feel the emotions, sophisticated, strong writing. El Nukoya astounds with amazingly sharp pieces of genius writing! – Cherry Mosteshar; Author of Unveiled
A brilliant novel written with superb clarity and knowledge on Yoruba Language and the subcultures in Lagos! El Nukoya’s confident use of words draw you into the story, whilst working on your imagination. An absolute masterpiece! – Bolanle Austen-Peters, Founder, Terra – Culture; Creator & Executive Producer, SARO – The Musical
El Nukoya paints the portrait of Lagos and of those who make it happen with broad strokes and a keen eye for detail. This is a Lagos story told with aplomb.– TONI KAN, AUTHOR OF NIGHTS OF CREAKING BED

El Nukoya is driven to educate and to moralize but also, perhaps above all, to entertain.  With this, his second novel, he succeeds in doing all three! – – ANDERSON BROWN, PROFESSOR, LITERARY COMMENTATOR 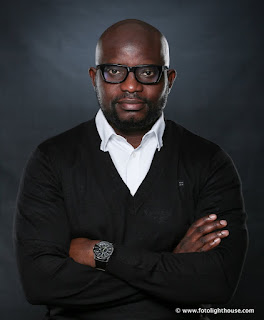 About The Author
As a youth in quiet sub-­­urban Ibadan, El Nukoya found solace in writing. Moving to Lagos afterwards brought him into contact with the hitherto obscure, often bizarre realities of living in Nigeria, thus supplying him with a compelling subject. The prevailing socio-­­political climate in the country gave added impetus to his compulsion to wr i te . Sixteen years later, he made his   debut.
El Nukoya dwells on the social contradictions endemic in the Nigerian society ─ a society where abject poverty permeates abundant wealth; where blinding ignorance triumphs over real intellectualism; where a progressively non-­­descript culture trumps an hitherto entrenched heritage; where blatant mediocrity precedes a parade of token certificates. Prominently, El Nukoya explores the despair of otherwise gifted youths, failed by the society’s insulation to the need to create credible avenues for social mobility – a society’s failure to facilitate a fair chance.
El Nukoya maiden novel ─ Nine Lives─ which won the ANA-­­ Jaccaranda Prize for Prose has been described as a “riveting page turner!”, “that rare thing: an authentic Nigerian    blockbuster!”
El Nukoya says he is flattered by the praise of his first novel, Nine Lives, pointing to his boyhood heroes as his inspiration to write a novel that conveys the message that society has a responsibility to create opportunities and, inherently, hope. The idea to put his thoughts on paper came in 1990 when he moved with his family to a quiet suburban neighborhood in Ibadan,   Nigeria.
“We had very few neighbours and our house was surrounded by a deep, green forest,” he said. “In my solitude, great musical lyricists such as Seal, U2, Sting, Bono and Tupac Amaru Shakur brought me companionship. Fela—of course—was always   present too; and so was Marley. Inspired by their talent, I felt an urge to create something that was universal and timeless. The prevailing socio- ­­political situation in Nigeria provided me with a virile subject. It was six years before I could   pause.”
El Nukoya did his first degree in Lagos, and graduate studies in North America. He currently lives and works in   Lagos
(c)Olutayo IRAN-TIOLA, Lagos, Nigeria