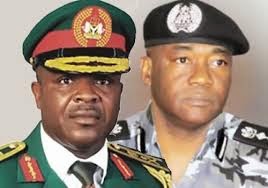 Ndi Obodoanyi,
Don’t get scared. It is my people in the Aniocha language of Delta State of Nigeria. Welcome to a new month and a new quarter in 2014. My own challenge at the turn of a new day, week, month, quarter and a new year is, “What have I achieved?” Let’s not waste time, life is all about time, and as a proper Igbo man would tell you, “Mai broad, time na money!”
Today’s discussion is from the Nigerian view, I know that I might draw some comments from the global community but I will be working from the context closest to me. We would all benefit if we open our heart to it: Army vs Police.
Army in the sense of their duty is expected to defend a particular territory against external aggression. It is very competitive to gain admission into the Nigerian Defence Academy. Armies are located far from city centres; the barracks are usually in secluded places but urbanization has caught up with them and they are not in the city-centres.
Army officers carry the aura of respect and honour. Based on their type of training, people do not dare them. They are very confident of surmounting any opposition. Their senior officers are treated like demi-gods, as we know they are associated with coup-d’état. They have the maxim, “Victory belongs to God”.
Police is expected to maintain peace within the territory. The process of becoming a police officer is very tedious. Police is expected to be civil and friendly. They are experts at collecting bribes. In fact, some years ago policing is done with cudgels and not with guns like it is done now. Police also have their barracks but not as distant as that of the army. They have been associated with stray bullets and many wanton deaths of civilian for no major cause.
The police are the last set of uniform officers to believe their tales; they have failed to successfully investigate murder of many prominent Nigerians leaving aside laymen. They mount roadblocks until the pronouncement by the recently the current Inspector-General and as a way of reducing hunger pangs, they now haunt in commercial buses, cars and with other vehicles donated to them. I hope this would interest you; the police cannot auction their vehicles because of the reckless usage. As a way of redeeming their dented image, they now have a slogan, “the police is your friend!”
What am I making you to understand today? As you go in the new month, ensure that all you do is noble. If you are not noble enough, it is not late to start. People won’t try you again if they discover that you are not noble.
Maintain a level of high confidence; a confident person has won the battle halfway. Screen your associates, don’t just allow anybody to taint your image; careful selection of friends help a lot. Be respectable and honourable, this is reciprocal. Lastly, understand that all your battles can only be won by God.
Join this army of great men who would not be afraid to stand for what is right and be distant from bribery, unreliability and injustice. You can re-write the gory tales of the past by doing it right henceforth.
Best wishes.
(c)Olutayo IRAN-TIOLA, Lagos, Nigeria