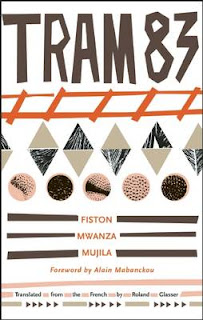 This is an excerpt from Tram 83 by Fiston Mwanza Mujila, which is shortlisted for the soon-to-be-announced Etisalat Prize for Literature and was recently longlisted for the Man Booker International Prize
Mujila, who hails from the Democratic Republic of Congo, will be in Durban next week for the Time of the Writer Festival, along with his fellow Etisalat shortlistees Penny Busetto and Rehana Rossouw. The trio will then head off to Lagos, Nigeria for theprize announcement on Saturday, 19 March.
Tram 83 was originally published in French, and was translated by Roland Glasser, winning a 2015 PEN Translates Award. The French original was a French Voices 2014 grant recipient and won the Grand Prix du Premier Roman des SGDL, and wasshortlisted for numerous other awards, including the Prix du Monde.
About the book
Two friends, one a budding writer home from Europe, the other an ambitious racketeer, meet in the only nightclub, the Tram 83, in a wartorn city-state in secession, surrounded by profit-seekers of all languages and nationalities. Tram 83 plunges the reader into the modern African gold rush as cynical as it is comic and colorfully exotic, using jazz rhythms to weave a tale of human relationships in a world that has become a global village.
About the author
Fiston Mwanza Mujila was born in 1981 in Lubumbashi, Democratic Republic of Congo, where he went to a Catholic school before studying Literature and Human Sciences at Lubumbashi University. He now lives in Graz, Austria, and is pursuing a PhD in Romance Languages. His writing has been awarded with numerous prizes, including the Gold Medal at the 6th Jeux de la Francophonie in Beirut as well as the Best Text for Theater (“Preis für das beste Stück,” State Theater, Mainz) in 2010. His poems, prose works, and plays are reactions to the political turbulence that has come in the wake of the independence of the Congo and its effect on day-to-day life. As he describes in one of his poems, his texts describe a “geography of hunger”: hunger for peace, freedom, and bread. Tram 83, written in French and published in August 2014 as a lead title of the rentrée littéraire by Éditions Métailié, is his first novel. It has been shortlisted and won numerous literary prizes in France, Austria, England, and the United States.
About the translater
Roland Glasser translates literary and genre fiction from French, as well as art, travel, and assorted non-fiction. He studied theatre, cinema, and art history in the UK and France, and has worked extensively in the performing arts, chiefly as a lighting designer. He is a French Voices and PEN Translates award winner and serves on the Committee of the UK Translators Association. Having lived in Paris for many years, he is currently based in London.
Read an excerpt from Tram 83, courtesy of Etisalat:

In the beginning was the stone, and the stone prompted ownership, and ownership a rush, and the rush brought an influx of men of diverse appearance who built railroads through the rock, forged a life of palm wine, and devised a system, a mixture of mining and trading.
Northern Station. Friday. Around seven or nine in the evening. “Patience, friend, you know full well our trains have lost all sense of time.”
The Northern Station was going to the dogs. It was essentially an unfinished metal structure, gutted by artillery, train tracks, and locomotives that called to mind the railroad built by Stanley, cassava fields, cut-rate hotels, greasy spoons, bordellos, Pentecostal churches, bakeries, and noise engineered by men of all generations and nationalities combined.
It was the only place on earth you could hang yourself, defecate, blaspheme, fall into infatuation, and thieve without regard to prying eyes. Indeed, an air of connivance hung ever about the place. Jackals don’t eat jackals. They pounce on the turkeys and partridges, and devour them. According to the fickle but ever-recurring legend, the seeds of all resistance movements, all wars of liberation, sprouted at the station, between two locomotives. And as if that weren’t enough, the same legend claims that the building of the railroad resulted in numerous deaths attributed to tropical diseases, technical blunders, the poor working conditions imposed by the colonial authorities – in short, all the usual clichés.
Northern Station. Friday. Around seven or nine.
He’d been there nearly three hours, jostling with the passers-by as he waited for the train to arrive. Lucien had been at pains to insist on the sense of time, and on these trains that broke all records of derailment, delay, and overcrowding. Requiem had better things to do than wait for this individual who, with the passing of the years, had lost all importance in his eyes. Ever since he’d turned his back on Marxism, Requiem called everyone who deprived him of his freedom of thought and action armchair communists and slum ideologues. He had merchandise to deliver, his life depended on it. But the train carrying that son of a bitch Lucien was dragging its wheels.
Northern Station. Friday. Around…
“Would you care for some company, sir?”
A girl, dressed for a Friday night in a station whose metal structure is unfinished, had come up to him. A moment to size up the merchandise, a dull thud, a racket that marked the entrance of the beast.
“Do you have the time, citizen?”
He had adequately assayed the chick and even imagined her lying on her mean little bed, despite the half-light. He pulled her body against his, asked her name, “Call me Requiem,” stroked his fingers across the young creature’s breasts, then another line: “Your thighs have the allure of a vodka bottle…” before disappearing into the murky gloom of the slimy, sticky crowd.